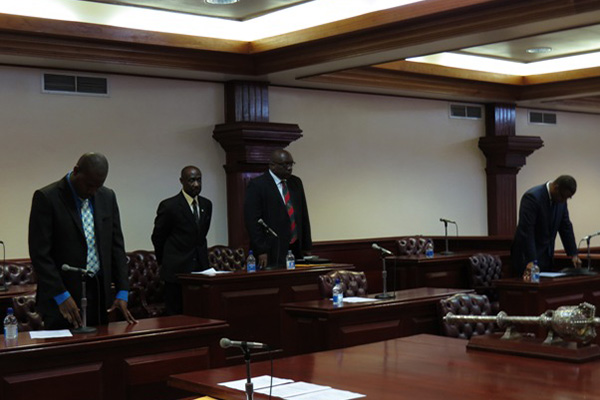 Opposition parliamentarians break boycott to secure their pay checks and their seats, then walks out of Tuesday’s sitting

(CUOPM) – Opposition members in the St. Kitts and Nevis National Assembly, who have been staying away from their duties in the lawmaking body, turned up Tuesday to secure their pay checks and their seats as lawmakers.

Four of the seven – Hon. Mark Brantley, Hon. Sam Condor, Hon. Shawn Richards and Dr. the Hon. Timothy Harris, spent less than two minutes in the National Assembly and departed after the prayer.

“Mr. Speaker, I hope you observed what took place in this Honourable Parliament this morning, nobody here has really said anything about it, but what happened this morning Mr. Speaker is a matter of responsible or irresponsible behaviour.

Four (4) adults, all of them elected and very proud of the fact that they have been elected. They have thrown it into my face over and over for the last 9 years that they are elected and I am not. They have gone abroad and said all kinds of things to people across this region and said that this government is illegitimate. But Mr. Speaker what happen this morning? The members as Honourable as they are for numbers #3 (Condor); #5 (Richards), #7 (Harris) and #9 (Brantley), came and sat in this Honourable Assembly and as soon as the Assembly started they packed up and left,” Mr. Skerritt, Minister of Tourism, International Transport, International Trade, Industry and Consumer Affairs.

“Now Mr. Speaker let us be frank and clear and open about it. Why did that take place? It was because of their irresponsible behaviour in this Honourable Assembly where they are playing games with this Honourable national institution,” said Minister Skerritt.

He noted that the opposition members have been absent for two previous Assembly meetings.

“They knew that the rules of the Assembly said that if they did not attend today, their seats could be declared vacant. Mr. Speaker, I repeat because I want people to hear me, whether you like this Senator or not, whatever you think about this Senator or not, I urge this country to listen to me right now, because here we are debating, well it is really no debate because the opposition has left in their usual irresponsible behaviour is not here; but here we are presenting a bill that speaks to how does a Government responsibly deliver services to one very large sector of our community, young people,” said Skerritt.

Social Commentator, Mr. Larry Vaughan in reaction to the walk out posted the following:

“I must confess however that today’s sitting of the House revealed that hypocrites make lousy critics as the Members of the Opposition played into the hands of the Government which they tell God and Man that it is ILLEGITIMATE.

Earlier this month I made this statement: ‘Quoting the text Government Illegitimacy In International Law, page 122 (Brad R. Roth) – legitimacy is determined by “the faction’s standing to determine the exercise or waiver of the state’s legal rights”; “[its] capacity to incur international legal obligations binding on successor governments and [ability] to engage in legally effective transactions on behalf of the state”; and “[its authorisation] by sovereign authority to further public order.””

Today the Opposition came to the House acknowledging these legitimate rights of the government including that which allows the Speaker of the House to declare their seats vacant after having been absent in three consecutive sittings. If the government were ILLEGITIMATE as was claimed before today, was it not ideal for the Opposition collectively to sit out today’s sitting and challenge, in court, the legitimacy of the Speaker to do declare the seats vacant. They know like I do that Dr Douglas and Labour only win libel cases.

So how ironic is it that those who spout the word ILLEGITMATE could not use this opportunity to prove their concept to be so. Let the court say, “Mr. Speaker, you have not heard the MONC raised when these men constituted the House and so they are entitled to remain members until the House is dissolved or the motion is heard.” Create new law. Breakthrough into new frontiers.

Alas the Lions became lambs. They lapped their tails sheepishly and walked into the House albeit for two minutes and followed the rule of law administered by a government with the legitimacy to “exercise the state’s legal rights”.

The second irony seen today is that those who claim that Dr. Douglas bends the rules of Parliament to serve his “selfish interest” did the very same thing today. And they did it en masse. On January 25, 2010, six stood before the people and pledged to faithfully serve them, the interest of this country and the cause of the people, without malice or ill-will.

But in the past three months where parliament has met for more than 30 hours or 1800 minutes…. six men have spent an accumulated 12 minutes in the Chamber only today. (Two minutes each.) This was done to ensure that they could get around the safeguards of the law that were put in place to assure that legislators gave the people full and fair representation.

How ironic is it that men who present themselves as the paragons of virtue and the champions of the good and the right are themselves manipulating the laws of the land without fear of repercussion and without a desire to set a good and right example, the kind they say has been so sadly lacking in the Government.

But my friend, that pales in comparison to the fact that these men turned up today to secure their bread and butter, but refuse to turn up one day later to say to the youth of our country that there is nothing more important than our combined involvement in building up our land of beauty.

If democracy then is such a high and holy principle, then the principled man would say “If I perish for boycotting this house and seat of power, I perish”. We recalled those words when one of the two minute non-boycotters of parliament spoke to the land for debt swap that today he is deafeningly silent on in Nevis instance. Ironic ah.

These men fail to realise that the youth are not to used as pawns in a game of political chess. No, I say.  We are the Kings and kingmakers. We the people are the objects of the game and the objective of the players should be to satisfy our desires and chart for us the way to a better future. Today displayed that the struggle for power is being waged to the neglect and demise of our people, most specifically our young people.

In my humble opinion, Mark Brantley, Timothy Harris. Sam Condor, Vance Amory, Shawn Richards and Eugene Hamilton owe it to our young people to show up tomorrow and show up with smiles on their faces, for they are getting paid. They need to be reminded that a letter of excuse was not enough to send to the Speaker to excuse themselves today so that they could have secured their jobs and salaries. Equally and perhaps more importantly so, a letter of excuse to the young people for making a political spectacle by boycotting their event is an insult.

The irony here is that these men take to the streets in campaign under the banner of unity. They call themselves Unity but refuse to join with the nation in a united effort that celebrates the accomplishments of the 25 Most Remarkable of our Youth. It is wrong. It is dead wrong. It is inexcusably dead wrong!

Parliament today showed me that men can do wrong things even when they think they have a right cause. How ironic is it then that these men cannot see the forest (the big picture) on account of this one tree.

Over the weekend SKNVIBES reported confusion in the opposition  camp.

It reported:It is being bandied that Members of Her Majesty’s Loyal Opposition of the Federal Parliament would continue their boycott of the legislative body come Tuesday (Nov. 26) when the House next convenes.

This is the report of at least one media house within the Federation and attempts to contact both the Opposition Leader the Hon. Mark Brantley and the Leader of the Unity Movement the Hon. Dr. Timothy Harris have yielded very little in confirming or denying the claim.

Both men referred this media house to the other and each explained that a release would be prepared and disseminated at the earliest convenience.

Should the Opposition miss the upcoming sitting of Parliament, it would be the third consecutive time for most of its Members.

On July 8, 2013, all Members of the Opposition Benches staged a walkout from Parliament after the Speaker of the House indicated that the Motion of No Confidence would not be allowed to be debated then.

It was in passive resistance that they staged that boycott, and during the following week the Opposition was absent when Parliament was again convened.

Their second consecutive absence was on September 9, 2013 when the Realignment of the Constituency Boundaries was debated and passed.

SKNVibes understands that all – barring one – were absent from that sitting.

Section 31(3) of the Constitution of St. Christopher and Nevis states: “An elected or appointed member shall also vacate his seat in the Assembly – (a) if he is absent from the sittings of the Assembly for such period and in such circumstances as may be prescribed in the rules of procedure of the Assembly.”

This publication was informed that provision is made for a seat(s) within the Parliament to become vacant if a Parliamentarian(s) refrains from attending three consecutive sessions of the House without proper notification being given to the Speaker. As at press time, the released promised by Messrs. Brantley and Harris was not circulated.