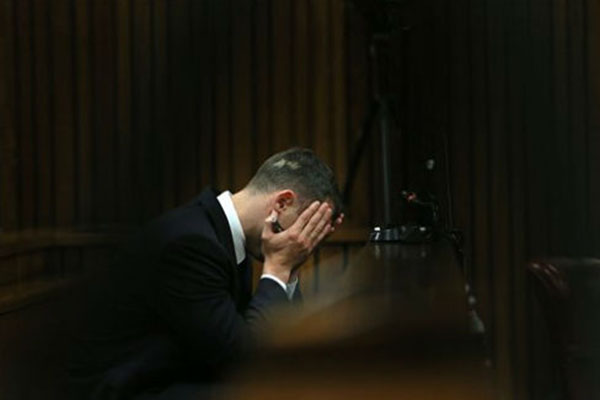 PRETORIA, South Africa (AP) — For five days, Oscar Pistorius endured a withering cross-examination at his murder trial from a prosecutor who pounced on apparent inconsistencies in his testimony. Yet, legal analysts said Tuesday, expert witnesses who will testify for the defence could undermine the prosecution’s efforts to prove Pistorius killed girlfriend Reeva Steenkamp on purpose after an argument.

The demeanor of the Olympian, often fumbling for answers and occasionally breaking into sobs, contrasted with that of prosecutor Gerrie Nel, who called Pistorius a liar and unleashed volleys of barbed questions. Social media buzzed that Pistorius is in deep trouble — a South African talk show host wryly observed that the double-amputee runner had not “covered himself with glory” when his cross-examination ended Tuesday — but experts said the trial has a long way to go.

“Until the defence presents the rest of their case, you can’t really evaluate the significance of any potential concessions that he may have made,” said Kelly Phelps, a senior lecturer in the public law department at the University of Cape Town.

The trial, which began March 3 and is expected to hear testimony until mid-May, reached a key stage last week when Pistorius took the stand to testify about the circumstances of Steenkamp’s killing in his home before dawn on February 14, 2013. The Paralympic champion, 27, says he shot the 29-year-old model through a closed toilet door after mistaking her for an intruder, but Nel catalogued what he said were conflicts in Pistorius’ story that prove he made it up.

The prosecution provided a “very clear narrative for the first time” of what it says happened on the night of Steenkamp’s death, Phelps said. The judge, she said, must decide whether Pistorius’ inconsistencies were a result of his clumsily trying to polish a story that is true in its fundamentals, or instead revealed an “elaborate cover-up plot” after he murdered his lover.

Phelps said the prosecution accused Pistorius of changing his account mostly on “smaller details” but that he had stuck to the “core parts of his story”.

Some commentators have speculated that Pistorius could face a lesser homicide charge that still carries long prison time in the event of a conviction.

Still, during cross-examination, Pistorius gave a sometimes muddled account of the shooting. He said he feared for his life but also didn’t intentionally shoot at anyone, prompting Nel to query if his defence was self-defence or “involuntary action”.

Inconsistencies in the athlete’s testimony include his statement that Steenkamp did not scream when he shot her but later saying his ears were ringing with the first of four gunshots and he would not have heard screams. A vital part of the prosecution’s case is the testimony of neighbours who said they heard a woman’s terrified screams on the night that Steenkamp died; the defence says they actually heard Pistorius screaming in a high-pitched voice.

Pistorius’ credibility was further challenged by earlier testimony against him for three unrelated gun charges in which he denied any wrongdoing when questioned by Nel. Possibly in his favour was his lack of anger on the witness stand despite the prosecution’s picture of him as overbearing and arrogant.

Du Toit, however, said the defence, which plans to call up to 17 witnesses, could still make it hard for the prosecution to prove beyond a reasonable doubt that Pistorius is guilty of premeditated murder, which carries a penalty of 25 years to life in prison. Du Toit said he wasn’t convinced that the prosecution had shown that he intended to kill, noting Pistorius fired roughly level with Steenkamp’s mid-section. Prosecution witnesses said the first bullet likely struck her in the hip.

“If you wanted to kill someone, you would shoot in the chest or the head,” du Toit said, adding that it was “not all lost” for Pistorius even though the defence has a lot of hard work to do.

That work started right after Pistorius finished testifying. Roux, the defence lawyer, had the runner read out a Valentine’s Day card from Steenkamp that she allegedly brought him just before he killed her. In it, she tells Pistorius that she loves him.

Roux then called forensic expert and former police officer Roger Dixon, who contradicted parts of the prosecution’s case. Dixon said he conducted tests in Pistorius’ bedroom that proved it was very dark there at night, supporting Pistorius’ statement that he could not see Steenkamp in his bedroom on the night he killed her, and describing some aspects of the police investigation as “unprofessional”.

Phelps, the University of Cape Town lecturer, said Judge Thokozile Masipa could consider the prosecutor’s allegation that Pistorius sometimes faked distress in the witness box to wriggle out of a tough question. Otherwise, she said, the athlete’s outbursts would not affect the judge, who will deliver a verdict because South Africa does not have a jury system.

“Her recognising that trauma will have absolutely no bearing on her determination as to what his state of mind was when he was firing the shots,” Phelps said.