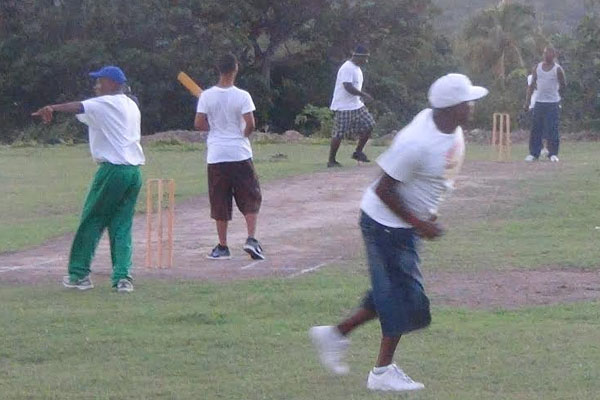 Sports Page — It was an enthralling match from start to finish, as the over 40’s team engaged the under 40’s’ team in a 12 over contest on Sunday 19th October.

The match was the brain child of Community Liaison officer for Gingerland, Michael WISE Herbert as he continues in his quest of uniting the communities within the Gingerland area and fostering true community spirit.

The match was the penultimate match of a three way series.

The over 40’s team batted first and was propelled by a quick fire innings by Rakeesh and later by Winston ATTA Hobson at the end.

The younger team seemed intent on finishing the game in just a few overs and at the end of six overs, they had already raced to over 80 with young Liburd and PUB pounding the ball to all parts of the Hard times playing field.

Both batsmen played some superlative shots, with PUB creaming the ball in the air and on the ground with sheer power and timing.

However, once TATAE was introduced into the attack, he produced a very mean spell of seam bowling and not only served to provide some crucial dot balls but also bowled Liburd neck and crop in the process.

With the fall of the main batsmen, it suddenly brought some sanity to the proceedings.

DELI RANKS, more known for his music, got off the mark with a six and followed that up with a four through mid off.

However, it came down to 12 runs needed off the final over.

The first ball was belted through TEENY at mid-off for four. TEENY fumbled the second and the batsmen ran two. Six required from four.

The third delivery was a dot ball as it went through to the wicketkeeper. The fourth was smashed to deep extra cover who fumbled and the batsmen ran two.

Four required from one.

The final ball was smashed towards mid wicket but the fielder pulled off a superb save and the batsmen could only run one..