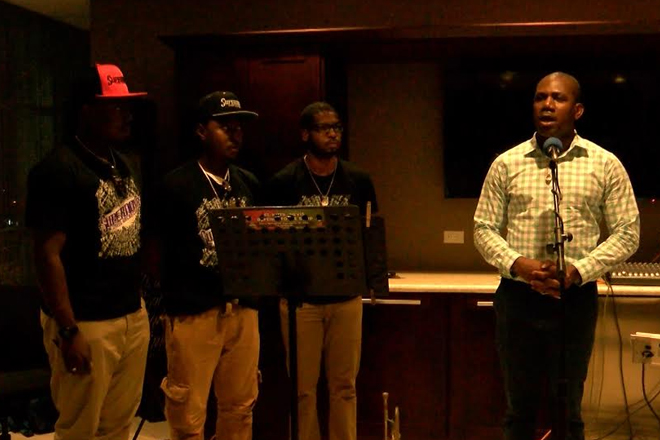 (ZIZ News) — A group of local steel pan musicians got a hero’s welcome on Monday when they returned from placing in the top 2 of the Panorama competition in Trinidad.

MJ Byron, Omandy Byron and Kazrano Gumbs formed part of Supernovas and placed second, missing out on the top spot by one point.

A contingent made up of performers, Carnival winners, and officials from the Department of Culture welcomed the musicians at the Robert L. Bradshaw International Airport.

Minister of Culture the Hon Shawn Richards congratulated the young men on their accomplishment and noted that his ministry has been supportive of their efforts.

All three are teachers and Minister Richards encouraged them to share what they’ve learnt and their love for pan with their students.

“We know that you are very involved in the playing of pan in the various schools that you are at; that is the Basseterre High School and Verchild’s High School. WE can only expect that the students from those institutions will benefit from the additional skills that you would have gained and once those students are able to benefit, indeed the entire Federation of St. Kitts and Nevis will benefit,” he said.

MJ Byron paid tribute to their mentor, Earl “Boots” Jones, and said performing in Panorama had always been their dream.

“We made it a get-together every year,” he said. “We’d come down by my house and we’d sit back; we’d log on to Trinidad Panorama, and we’d watch it from afternoon until the next morning, hoping that this would be a reality for us one day. And look at us here going into the top ranking competition, the Large Band Competition, in every leg doing fantastic with the Supernovas group that we went to play for.”

The three musicians have been participating in Antigua’s Panorama since 2008 with Mahico Stars and the Gemonites Steel Orchestra.