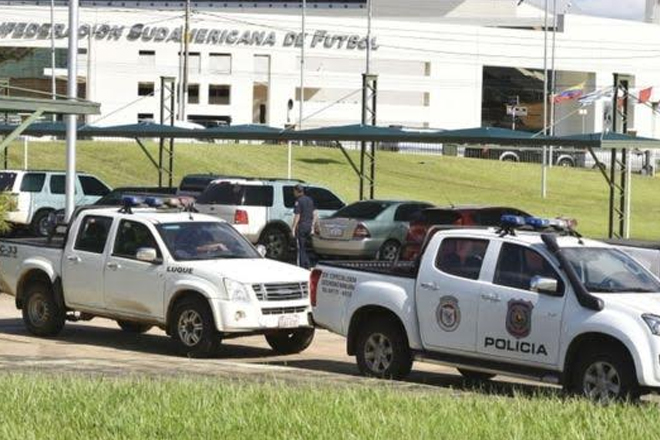 (BBC) State prosecutors in Paraguay have raided the headquarters of Conmebol, South America’s football confederation, near the capital Asuncion.

They said the move was part of US-led investigations into corruption at Fifa, world football’s governing body.

Last month the president of Conmebol, the Paraguayan Juan Angel Napout, was extradited to the United States to face charges there.

Mr Napout has pleaded not guilty to taking millions of dollars in bribes.

Paraguay’s state prosecution service said in a statement it was “searching for documentation related to the granting of commercial and broadcast rights for sporting events”.

A lawyer for the confederation, Alfredo Montanaro, said the raid was “irresponsible”.

“It is very strange. We have been cooperating with the judicial authorities of the United States, Uruguay and Paraguay.”

Who are the indicted Fifa officials?

Mr Napout, 57, was also a Fifa vice-president. He was arrested in a dawn raid on a luxury hotel in Zurich, Switzerland, on 3 December.

He is accused of taking bribes worth millions of dollars linked to the sale of marketing rights to South American tournaments.

He resigned as Conmebol president on 11 December following his arrest and is currently banned from football.

Meanwhile, the former general secretary of Guatemala’s football federation, Hector Trujillo, who has been charged with corruption in the US, has been allowed out on the terms of his house arrest.

He must wear an electronic monitor and cannot travel more than 50 miles (80km) from a federal courthouse in Brooklyn as part of a bail agreement set by a US magistrate.

The FBI investigation into Fifa corruption was initially sparked by the controversial award of the 2022 World Cup to Qatar, as well as the bidding process for the 2018 World Cup awarded to Russia.

But the inquiry has since been widened to look at Fifa’s dealings over the past 20 years. The US says the corruption was planned in the US and US banks were used to transfer money.