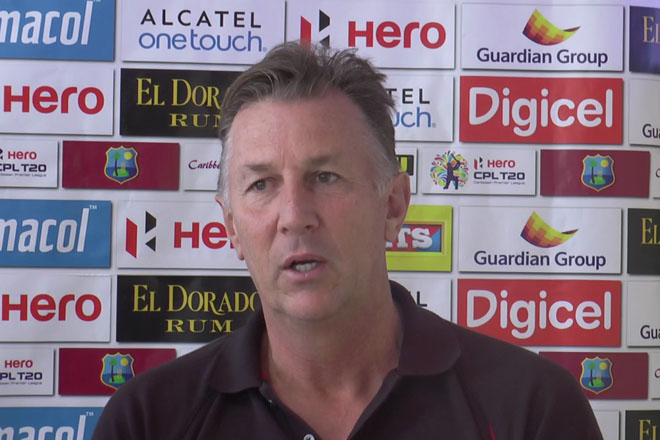 (ZIZ News) — The St. Kitts and Nevis Patriots will be taking on the Jamaica Tallawahs in the first match at Warner Park in the 2015 edition of the Hero Caribbean Premier League tournament.

That match is scheduled for Tuesday June 30th, starting at 6pm.

During a press conference held on Monday, Patriots’ Coach Eric Simons said there is renewed confidence in the team as a result of Saturday’s victory over the Barbados Tridents.

He said, “Any win is important when you just have ten games to establish yourself and obviously we’re a new team and we’re trying to play a brand new cricket and the quicker we learn, the quicker we understand as a team, the better so when we start producing results like that it’s really good. I think we played really well. We are very happy with the things we did. We also saw an exceptional inning from Pollard to bring them back in the game from 15 for 3 but obviously there are a lot of things we are proud of.”

Remaining tight-lipped on possible changes to the squad for the home matches, Patriots’ Captain Marlon Samuels said the local players will definitely get their chance to play.

“The passion is handpicking players from different places; I know I handpicked a different player from South Africa and they all believe in me so I want to carry them to the next level and it would be a wonderful feeling to give St. Kitts and Nevis a title,” he said. [Tonitto] Willet’s career hasn’t gone the way that it should but nonetheless you know you still have to give people a chance and I’m sure you’re going to see him in the tournament because he’s gonna get his opportunity. All during the practice games he’s been batting extremely well making 60-plus in a little bit of balls and stuff like that so he will definitely get his chance,” Samuels continued.

Meanwhile, Coach of the Jamaica Tallawahs, Junior Bennett said they will be taking a different approach against the Patriots.

Bennett said, “Each team has something to offer; something different to offer so we plan around whichever team we’re playing. So playing the Patriots, our plan has to be different from the Zouks. So we’re just looking to come out here and play consistent cricket right throughout and I believe once we do that we will be very competitive in the game.”

The St. Kitts and Nevis Patriots team is coming off its first ever CPL win when it defeated the Tridents by one run on Saturday.

The Jamaica Tallawahs shook off a rusty start to the tournament to register a 10-wicket win over the St. Lucia Zouks on Sunday.