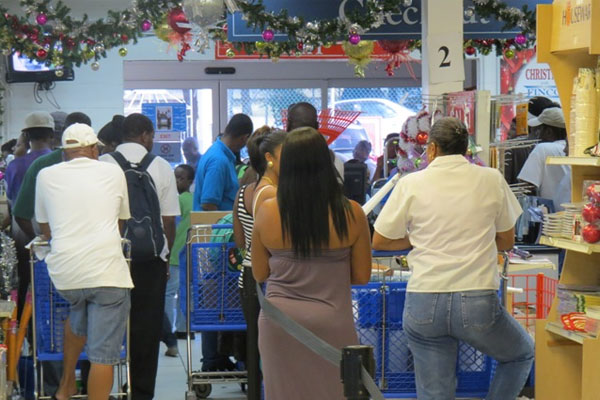 People benefited from initiatives to stimulate the local economy

Basseterre, St. Kitts (CUOPM) — The exceptional level of participation in the Carnival and Christmas activities and the extent of the shopping and consumer expenditure just before and during the festive season is indicative of the great success in stimulating the economy of St. Kitts and Nevis over the past year.

The two Reduced VAT Days instituted by the St. Kitts-Nevis Labour Party Government and the exemption of from customs duties on food packages and other imports during the season have helped considerably in boosting economic activity.

Prime Minister and Minister of Finance, the Rt. Hon. Dr. Denzil L. Douglas disclosed that during 2013, construction activities have been on the rise as a result of the Government’s continued investment in low and middle income housing and the related infrastructure; the construction of new homes by local people through the mortgage financing and guarantee schemes of the Sugar Industry Diversification Foundation; the continued upgrading and expansion of our physical infrastructure including roads, bridges, and drainage systems; and the construction of an unprecedented number of hotel and condominium rooms through the very favourable investment climate that the Government has established and the growing market for upscale residential units created by our successful citizenship by investment programme.

“The level of economic activity is also heavily influenced by the growth in tourism, as manifested by the increasing number of international flights to our Federation and the frequency of calls by cruise ships which, based on the current projections, will bring a record 785,000 passengers to the Federation during the 2013-2014 season. It is therefore not surprising that, according to a recent global travel industry publication, Nathan Dundas, the Head of the Antigua and Barbuda Cruise Tourism Association has lamented that Antigua and Barbuda, which was number one in the cruise tourism industry in the OECS “has been surpassed by islands like St. Kitts and Nevis and St. Maarten,” said Dr. Douglas.