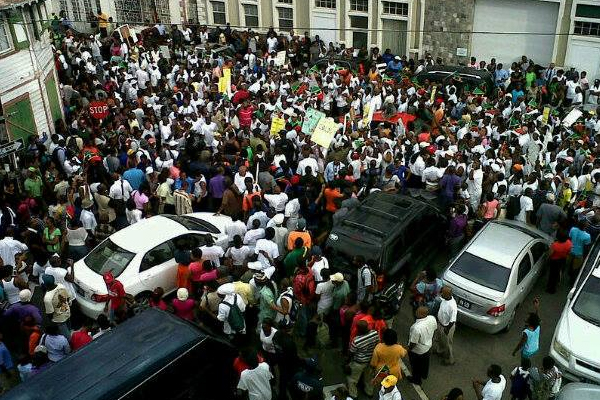 Basseterre, St.Kitts (Team UNITY Communications) — September 26th 2013 will likely go down as a watershed moment in the political history of St.Kitts-Nevis. It is the day that officially began the Era of UNITY. Thousands (Estimates at over 6,000 people) showed up at Greenlands Park to witness the official launch of Team UNITY. The historic event saw two active Nevisian politicians on a political platform in St.Kitts and three major political parties sharing the same stage in one accord.

The historic ride on the UNITY Train continues next week with a series of major events that will continue to change the political landscape in St.Kitts-Nevis for the better.

On Wednesday October 9th Team UNITY will roll into East Basseterre and join Ian “Patches’ Liburd and the Warriors from the East on George Street to stage the first UNITY Public Meeting since the historic September 26th Launch. The UNITY “Warriors Rally” will start at 8pm and will feature candidates and presenters from the 3 major Political Parties CCM, PLP and PAM who have come together to form the history making partnership known as Team UNITY.

The George Street Rally will be followed on Thursday October 10th with a Lunchtime Public Meeting at the C.A.P Industrial Site.
The weekends on Friday October 11th with a “People Power’ UNITY Movement March and Rally. October 11th marks exactly 10 months since the filing of the Motion of No Confidence.

Organisers of the March have declared that they intend to bring the largest march in recent times to the streets of Basseterre to bring attention to the continued delay of the debating of the Motion of No Confidence and to demand that the Motion be debated immediately or parliament dissolved and an election date declared.

The official schedules of upcoming Team UNITY events include: