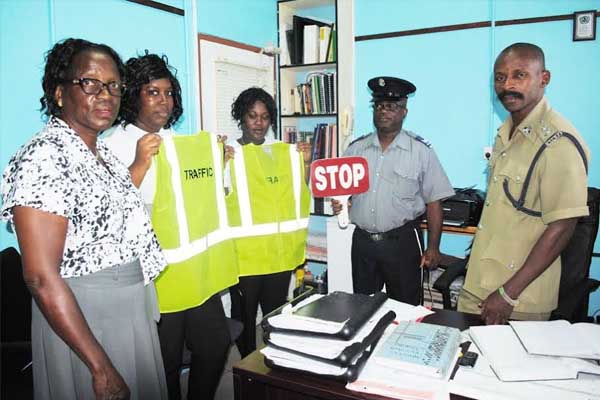 Basseterre, St. Kitts — The People Employment Programme (PEP) is a dynamic national developmental tool that empowers a country’s people in the most holistic way and can only be the product of a visionary and mindful directorate.

The programme’s Assistant Project Manager, Mrs Beverley Williams, made the remarks recently when Inspector Carl Caines who is the head of the Traffic Department in the Royal St. Christopher and Nevis Police Force received reflective vests and stop signs to be used by traffic wardens charged with the responsibility of ensuring safety for pedestrians using the busy roads.

“Very few people saw the farsighted vision the leader of the country the Rt Hon Dr Denzil Douglas had when he launched the programme in December of 2012,” said Mrs Williams. “Many saw it just as a tool to put people in employment. But it is a programme that brings with it multifaceted benefits to the country in general.”

Mrs Williams said that members of the public need to look beyond the empowering of People Employment Programme workers who are attached to the Traffic Department of the Royal St. Christopher and Nevis Police Force through the gift of 100 highly reflective safety vests and hand-held stop signs.

“By empowering the PEP staff attached to the police force, we are effectively cutting down the number of accidents that take place on our busy roads,” commented Mrs Williams. “By so doing, the country is freeing its hard working doctors to take care of the more threatening non-communicable diseases instead of spending time dealing with injuries suffered by unfortunate pedestrians and even motorists.

“That is a hidden benefit of the vision of our leader, and I also want to acknowledge the PEP Project Manager Mr Geoffrey Hanley who is richly blessed with the knack to assess correctly where PEP resources are greatly needed. His collaboration with Inspector Carl Caines is a testimony to it.”

On accepting the items, Inspector Carl Caines acknowledged his association with PEP Project Manager Mr Geoffrey Hanley since the programme was launched, the result of which a number of PEP workers were attached to the Police Force where they are doing a commendable job.

According to Inspector Caines, Mr Hanley approached him earlier this year and asked him (Caines) to make a proposal and submit the completed proposal as to what they would need to make the collaboration between PEP and the Police Force a more workable one.

“We have over 50 PEP personnel, among them about 40 crossing guards, but we received 100 vests. They will therefore also be used by crossing guards who are not necessarily on PEP. Mr Hanley is assisting the entire operation, but I must say though preference will be given to the PEP personnel first, and then the traffic wardens and crossing guards would get them.”

Inspector Caines, who was in the company of Corporal Elvin Browne of the Traffic Department and two PEP workers, Ms Jamela Bishop and Ms Chalicia Dore, observed that the new safety vests would help the workers to be identified by the public and more so by the motorists as the persons manning the crossing because the vests are clearly marked ‘traffic’.

“They (vests) are reflective and the colour itself it is so bright that you can’t miss it,” commented Inspector Caines. “The PEP workers are all over the country, some of them are in offices but these will be used by those who are on the road. I have them in Basseterre, and I also have them in the offices in outstations.

“The PEP workers are doing very well, giving us good support and they are really going beyond the call of duty. We call on them, and I can leave assignments for them. Whereas they used to be looking for everything, for example to get the conviction sheets at courts, I just provide the court list on a Tuesday and the PEP traffic wardens look for those conviction sheets so it takes a lot of weight out of me and extra stress because they assist.”

Corporal Browne who works closely with the PEP workers agreed with Inspector Caines that the vests and the stop signs are going to enhance the workers, as they are going to make them more visible to the travelling public and make their work much easier in terms of their safety as the public will be able to see them and to respond to their directions in a more timely manner.

“As always, what we have been advocating is that they respect all traffic signs, and all the workers who are out there working and giving directions on behalf of the police,” observed Corporal Browne. “They might not be police officers but they have the blessings from the top brass of the police force to assist the police officers in directing and controlling and restricting the movement and ensuring the free movement of traffic on our roads.”