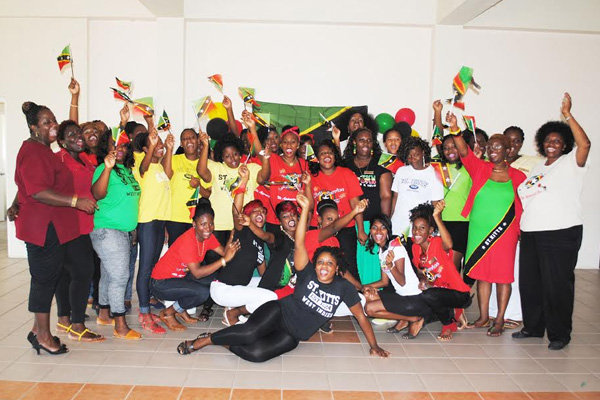 Basseterre, St. Kitts — While she is younger than Independent St. Kitts and Nevis, 27-year-old Sue-Lynn Johnson had reason to celebrate when her beloved nation observed its 31st independence anniversary under the theme, ‘A Nation on the Move, Celebrating our Progress’.

Ms Johnson is a beneficiary of the People Employment Programme (PEP), which is offering her and her colleagues training at the PEP School of Cosmetology at the Newtown Community Centre, while earning a salary. On Thursday September 18, she and her colleagues executed an Independence Day programme in honour of her motherland.

“St. Kitts is going nice,” said Ms Johnson, who was the manager of one of the groups. “There is lots of progress and PEP is a big part of the progress. PEP has helped me greatly. Since I have been on this programme in the PEP School of Cosmetology I changed a lot, like to attitude wise, how to speak to people … the experience is very good.”

The PEP School of Cosmetology has four groups, but only three groups took part in the Independence Day programme. Ms Johnson was the manager of a section of Group I under Senior PEP Facilitator Ms Juliette Queeley. Their performance was to spell out the true meaning of the name St. Kitts.

After Ms Jameisha Peets gave the meaning of letter ‘S’ at the end of the name St. Kitts (super sexy) the flag waving members of the group said in unison: “If you do not like it, jump off” to a thunderous applause from those present, including PEP’s Training Coordinator Mrs Celia Christopher, and their guidance counsellor Pastor Marcia John.

“We are in Group One,” explained Ms Johnson, whose co-manager was Ms Casilda Richards. “We just got the acronym yesterday (Wednesday September 17), but everything else we took two days to practise. It was a first time experience but it was good – it was really nice.”

According to Senior PEP Facilitator for Cosmetology, Ms Juliette Queeley, the Independence Day programme was aimed at sensitising the trainees to the whole independence story, to enable them know the true meaning behind it, where the country is coming from, where the country and its people are heading.

“Also we had to make them aware of the progress that has taken place under independence, and they know how long we have been independent for,” explained Ms Queeley. “They learnt from that, but it also helps them, as it also brought out their creativity.

“They know that they could expound on things because quite a few of the pieces they put together themselves. So that was very good and you know it helped with their public speaking and things like that.”

There were solo performances from some of the trainees, and other group performances included a Group 1 dance entitled ‘Celebrating Independence’ which had borrowed lyrics from ‘Unstoppable Force’ by King Konris Maynard, and a Group 3 performance entitled ‘The Paths of Progress’.

Ms Petra Newton, Cosmetology Facilitator for Group 3, said that their aim was to do things with a difference and the trainees had trained hard to bring out the assorted presentations which went down very well.

“It is independence and we are very patriotic so we decided to put together a programme,” observed Ms Newton. “It was a last minute put together but it was executed well, so we invited the young lady from PEP TV to come and take a video of it so we can have it for posterity, and the trainees were so willing to take part and we had a successful programme.”

When the PEP Training Coordinator, Mrs Celia Christopher was invited, little did she know that she would be asked to take part in the proceedings. Group 3, which delivered the presentation dubbed ‘The Paths to Progress’, asked her to display the flag of St. Kitts and Nevis.

“I was very honoured to be a part of this little simple independence ceremony, because what it does and what it tells me is that there are still a lot of people who are very patriotic and it brings out the patriotic side of these trainees,” said Mrs Christopher.

“These trainees never cease to amaze me. They invited me and it is when I got here that I realised it was much more than an ordinary invitation. It was an Independence Day celebration and it really took me by surprise and of course you always got to be prepared.”

When asked to join the group, she draped herself in colours of the national flag, and holding a miniature flag, said: “The flag is the symbol of love, liberty and freedom and these are things that we should always cherish and today I am happy to be part of this exercise.”