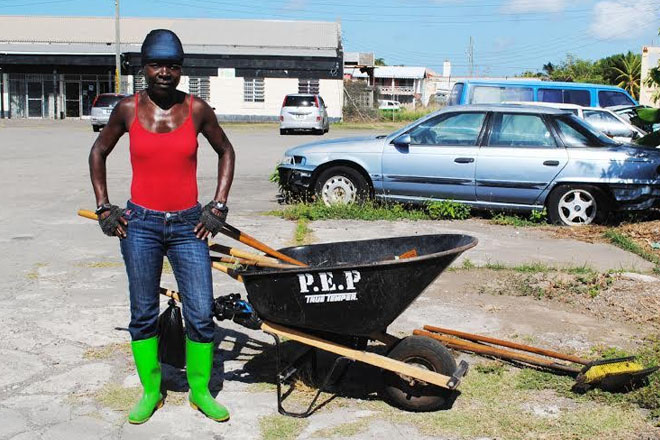 Basseterre, St. Kitts — The Federation of St. Kitts and Nevis joined the rest of the world on Friday June 5 in the observance of World Environment Day, and among persons celebrating were residents of New Town which has benefitted immensely from a clean-up programme initiated by the People Employment Programme (PEP).

According to Senior Field Supervisor, Mr Jason McKoy, the People Employment Programme has a ten-member team, the New Town Drain Cleaners’ Group, which is charged with the responsibility of cleaning drains in the area between East Independence Square and the Pond’s Industrial Site.

“For the period we have had them working, the general cleanliness of the area has greatly improved as they are selflessly doing their duties,” explained Mr McKoy. “It is a well-known fact that our people have this bad habit of throwing garbage in the drains something that makes them clogged up and smelly especially during the rainy seasons, which also encourages the breeding of mosquitos, rats and cockroaches.”

Mr McKoy regularly visits the PEP workers to listen to their grievances and needs, and to encourage them. The meetings have been cordial and the workers have told him what they need to make them more effective, and PEP has responded by ensuring that they are provided with the equipment that would enhance the delivery of services to the residents of the area.

PEP has supplied them with brooms, rakes, shovels and wheelbarrows and will shortly be providing them with cutlasses that will enable them to uproot any weeds growing in the verges of the drains. He reports that they work hard under very harsh elements and he is appealing to members of the public to refrain from throwing garbage in the drains.

Ms Jeanette Huggins, a resident of New Town is one of the persons engaged through PEP and she says that she enjoys her job because she loves seeing a clean neighbourhood. She works in the area between the old CEMACO supermarket, the Police Training College, and the New Town Community Centre.

She says that while it is not proper for persons to throw garbage all over the place, that habit does not real bother her as she goes about collecting what people have thrown away. She has in the past received commendation from PEP’s Training Coordinator Mrs Celia Christopher, who praised Ms Huggins for her diligence in what she does.

Mr Attlee Simmonds whose area of operation is in the streets near the Immaculate Conception Catholic School says that apart from the challenges of garbage that is thrown about, he also has to contend with trees that shed their leaves, as these cannot be left on the ground. He says that he reports to work at 4:00 a.m. when it is cool and that way when residents wake up they find a clean environment.

In the area next to the one Mr Simmonds takes care of, there is another early riser in Mr Alister Halliday whose ‘territory’ covers the areas up to and including the Bay Road. He has to contend with the several businesses in the area where people buy cold drinks and after finishing with the drink they throw the containers in the drains.

“It is not hygienic to throw away this garbage in the drains,” says Mr Halliday. “I do not get vex with them, but it is my hope that when they see the efforts that we put in, that they will see the need to change and walk away with their garbage and get rid of it in a responsible manner. Because of PEP we are making a difference in this area.”

Senior PEP Field Supervisor, Mr Jason McKoy, is commending members of the New Town Drain Cleaners’ Group and adds that all efforts are being made to ensure that they are not just earning a living, but also learning a trade which they can use to better their future lives. St. Kitts being a tourist-attracting island, all efforts will be made to make it environmentally safe for all — locals and visitors alike.