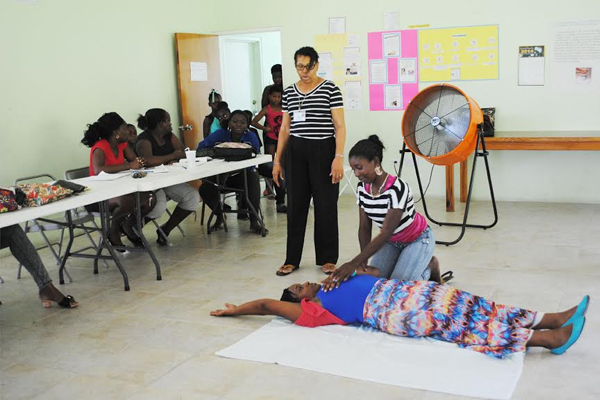 Basseterre, St. Kitts — Thirty-year-old Ms Terricia Piggott, originally from Parsons Village, grew up assisting her mother in the hospitality industry. When the People Employment Programme (PEP) presented her with a chance to train, she opted to do hospitality.

She was however late as when she presented herself at the PEP offices, she was told that there were no more vacancies in the hospitality class. Rather than act up and throw tantrums, she chose what she felt was her second choice – Early Childhood Development. She now says that she made the right choice.

“When they told me no more vacancies were there for the hospitality industry, I decided, okay, since I have children of my own, I should just give early childhood a try to see if dealing with the nation’s children would change me a little more,” said Ms Piggott.

“I also looked at things that I didn’t get to do with my own children which if I would learn by taking the opportunity PEP was offering me, maybe I could pass it on to other people’s children. So that is why I chose early childhood and I believe that I made the right choice.”

Last month, August, saw the Early Childhood Development class under veteran Early Childhood practitioner Mrs Vanta Walters going through one of its modules, ‘Support, Safety and Wellbeing of Children’, and one of the areas they had to cover is how the trainees, as early childhood caregivers would be able to respond if there is an emergency at the school.

Mrs Walters invited Mrs Natalie Fough of the St. Kitts and Nevis Red Cross Society to give lectures on First Aid, and on administering CPR (cardiopulmonary resuscitation) and how to deal with choking in children. The 21 Early Childhood trainees appreciated the training and Ms Piggott had a special reason why the training came in handy for her.

“I have seen CPR administered on television but I never actually did it to anyone, but I think it is very educational,” said Ms Piggott. “It was a good experience for us because it is not only benefiting the children we are going to be looking after in the day care centres, it is going to help us with our children also, in case of anything like choking.

“I guess what she (Mrs Fough) taught us today it is good and I am going to put it in practise, because I have a four-year old daughter who has whizzing. So this course it has come as a help to me as well, learning how to cope with the whizzing in my child.”

The reason why Mrs Walters invited Mrs Fough to give the two lectures was because she wanted the trainees to know what kind of emergencies they could expect to happen in an early childhood institution and how to recognise the extent of the emergency, the extent of casualties suffered by the children and also what immediate action they can take.

“She touched on indeed some of the common emergencies that can happen, the falls, the fractures, the burns, the bleeding and she gave the participants a chance to participate not only in discussions but in demonstrating on each other what they can do.”

Ms Shanika Percival, a PEP trainee from Boyd’s Village but who now lives in Sandy Point, pointed out that she was interested in the lecture because she is going to work in the early childhood sector and what they learnt would make it possible for them to look after children entrusted to them by parents.

“I am sure that the other young people they are glad they are on board with PEP so they can have income for either themselves or their children. And they are also learning a skill. PEP is more than a blessing.”

Another of the trainees, Ms Vericia Allen from Cayon said that the lessons had given them good directions to take when there is an emergency at a day care centre on how to administer First Aid and on the things one should not do but to leave it to trained ambulance personnel.

“The learning is great,” noted Ms Allen. “I am grateful for PEP because if it wasn’t for PEP I might have been home unemployed and either begging or doing something to make sure my children get feed and the minimum wage they are giving me is helping me out a lot.

“Yes, I am grateful for them. It is a good start because when I qualify I will earn more money, and the training that PEP is providing is giving us the exact skills that we will need for our chosen fields, so we will not be going out there blindly not knowing what to do. PEP is an eye-opener.”