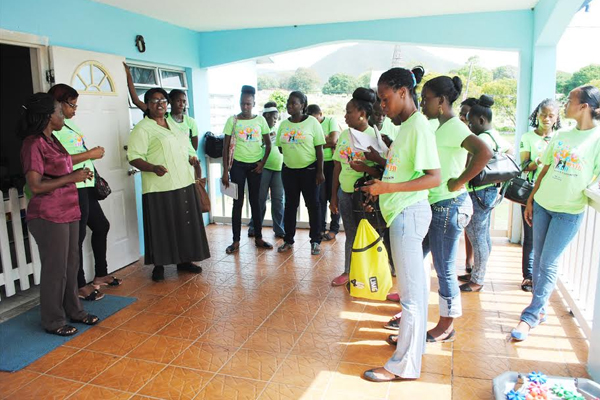 Basseterre, St. Kitts — Facilitator of the People Employment Programme’s (PEP) Early Childhood Development, Mrs Vanta Walters, has recently given the 21 trainees in her class the opportunity to learn what the world of work has for them.

As the training gets closer to its natural end, Mrs Walters wanted the trainees to get to know first-hand the conditions under which they will be working when they finally go out to work, but she chose to take them to government-sponsored day care centres only.

“On Thursday August 14, the trainees had a very exciting and interesting experience,” explained Mrs Walters. “We went on an island tour, visiting all of the fifteen Early Childhood government centres in St. Kitts.”

She thanks the Chief Education Officer, Mrs Clarice Cotton, for helping facilitate the trip, and also the supervisor of the bus drivers, Mr Alpheous Rueben Mulraine and the driver who was designated to take them around, Mr Winsett ‘Mr Humble’ Christopher.

“The driver lived up to his nickname, ‘Mr Humble’, as he was very patient with us and very friendly and made us feel comfortable on the long trip around the island,” observed Mrs Walters. “We visited all of the Early Childhood institutions; the government ones.”

The other objective of the trip was for the trainees to see the difference between a nursery, a preschool, and a day care centre in the St. Kitts-Nevis context. The trip afforded them the opportunity to visit the newest centre that was recently established in St. Paul’s and they were all fascinated about that centre, both in terms of the design, and the furniture and equipment.

“The final objective was to have the girls interview the supervisors,” explained Mrs Walters. “So all of them interviewed either the supervisors themselves or those who were acting because some of the supervisors were on vacation, and they were able to collect statistical data. It included what is the roll, how many children the centres can accommodate, how many classrooms they are divided into, how many preschool classes, and how many in nursery.”

The trip however spilled over to Monday August 18, and reflecting on the final day where they visited the Sandy Point Nursery, Sandy Point Preschool and Old Road Day Care Centre, the PEP Early Childhood Development facilitator said that they were able to compare three different types of centres.

The trainees are now expected to put a report together on the trip, which should include all the data they collected and they are also expected to do some comparisons of the centres, and have been given the liberty to be a little personal and say which ones they prefer or which ones impacted them the most and give the reasons.

Two of the trainees, Ms Kishma Eddy and Ms Koyelle Hazel, said that the trip was a real eye opener for the fact that they were able to compare what they have learnt under Mrs Walters with what happens at the centres and they feel that they are on the right track, and have given all the praise to the People Employment Programme (PEP) for giving them that opportunity.

Ms Eddy, who would have had work experience at a day care centre in Nevis, said that the training has given her more. She singled out the Tabernacle, St. Peter’s, and St. Paul’s Day Care Centres as the most impressive for the way they cater for special needs children and also for parents of the children.

“With the training that I have received under PEP, I believe I can fit in the day care centres,” noted Ms Eddy. “Certain things I was taught in Nevis. I have however learnt other new things as well. PEP is a good experience for me. It was a good idea for the government to bring up the People Employment Programme, especially for those who were unemployed, including myself.”

Ms Koyelle Hazel, who is the mother of an eight old daughter, explained that what they are doing and learning in class under Mrs Walters are the same things that are being done at the centres. She concluded that what she is being taught through PEP will be relevant to what she will be doing in future, and she is quite happy about it.

She singled out the Industrial Site centre as one that she liked, and not because it was the one her daughter attended, and also the St. Paul’s Day Care Centre which is a spanking new facility, and was also quick to point out that there was no bias based on the fact that she is from St. Paul’s.

“PEP is not only training me, it is also paying me and I am able to cater for my daughter who is now in primary school,” said Ms Hazel. “I say PEP is a blessing because if it was not for PEP I would never have a job right now, probably I would be out of a job.”