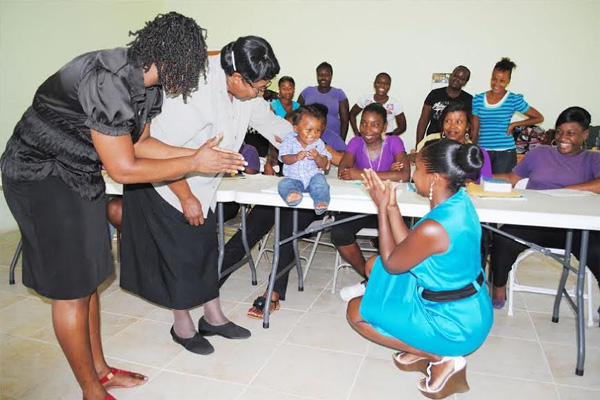 Basseterre, St. Kitts — When Montreal-based Kittitian Mrs Donna Blake volunteered to give back to her motherland, little did she know that her eight-month old son Treval Blake-Bassue would steal the show.

After she learnt that the People Employment Programme (PEP) had taken veteran Early Childhood educator Mrs Vanta Walters out of retirement to run its Early Childhood programme, Mrs Blake who is a holder of a Bachelors’ Degree in Early Childhood from Concordia University offered to work with the trainees.

“I wanted to see if I can work alongside Mrs Walters,” said Mrs Blake. “Being a young person in the field, I am always looking to learn. So I took the initiative and made contact with Mr Maurice ‘EK’ Flanders of Freedom FM Radio and asked him to give me PEP Project Manager Mr Geoffrey Hanley’s contact as I had heard him on one of EK’s shows.”

Mr Hanley gladly accepted Mrs Blake’s offer to volunteer and work alongside Mrs Walters for the short period she would be in her motherland. She arrived in the country onMarch 24 and after she met Mr Hanley, he took her to the Challengers Community Centre where the PEP Early Childhood programme is being conducted.

At Challengers she would do two sessions per week assisting Mrs Walters execute a new training module, Perform Interactive Workplace Communication. According to Mrs Blake, she dealt with professionalism and ethics within the workplace, working with the exact details in the module and taught them by giving examples on how to perform within their workplace.

“I got very positive responses because one of the key things that I realised with the trainees is that they were giving me scenarios, ‘what if this happens’, ‘what if that happens’, so the learning environment was very positive and interactive,” explained Mrs Blake.

Mrs Donna Blake, a mother of three had come with two of her children having left her eight-year old daughter Senait back in Montreal under the care of her grandmother. She came with two sons, four-year old D’Ondre who she enrolled in a local preschool, but would bring Treval Blake-Bassue, who was then six months old, to Challengers.

“I also brought my son here with me, he was six months at the time and the trainees have always helped in caring for him, which is part of their training process,” observed Mrs Blake. “So I did an observation with them while they hold the baby.”

She said that she would observe the way they held him and how they interacted with him and they would point out certain behaviours and how stimulation for example for infants at that stage is done.

“The baby was used as a prototype as well and he bonded nicely with the trainees,” commented Mrs Blake. “When we arrived my son was six months, he is now eight months. They have watched him grow for two months, and they took part in nurturing him as well.

“As soon as I walk through the doors, somebody takes him from me and I am able to interact with them more. As soon I reach, whether he is sleeping or not he has to be woken up by one of the trainees so that they can interact with him. I did not have a baby sitting issue.”

Early Childhood Educator Mrs Blake praised the Federal Government of St. Kitts and Nevis for initiating the People Employment Programme which is offering training and employment to young people at the same time.

“The initiative of the government, I would say, is a great job because here we are providing employment for certain sectors of young people who need that employment, and who need that training to further themselves to the next level,” noted Mrs Blake.

“It is therefore helping the economy on a whole to better itself and the country on a whole. I think the government is doing what a government is required to do for its people. In this particular area, it is a well needed training.”

Mrs Donna Blake, who is originally from Newton Ground and who returns to Canada on June 2, said that the experience has been amazing especially how the trainees welcomed her and bonded with her son. She also thanked Mrs Vanta Walters for agreeing to have her (Blake) working with her saying that she gained a lot of experience, adding that she would come back if the opportunity is extended.

“When Mr Hanley informed me that someone would be willing to do some voluntary work, I was extremely happy because I saw it as an opportunity to have someone working along with me which will ease some of the pressure a bit, and also for the trainees to hear another voice,” said Mrs Vanta Walters who is the only facilitator for a class of 21 trainees.

“Donna was able to assist greatly in delivering the module we were working on at the time, and they were very receptive,” commented Mrs Walters. “As a matter of fact, when she informed them that she was leaving, there was not a dry eye in there. Donna and I bonded so well and they were able to see firsthand the kind of communication team work that could take place.”

Mrs Walters thanked Mrs Blake “for allowing us to use her baby as a guinea pig to practise on.”

The PEP Facilitator also noted that when Mrs Blake came she brought items that she figured the trainees would need. These included pencils, pens, rubbers, folder leaves, note books and bags that she donated to the trainees, and she gave the facilitator highlighters and markers.