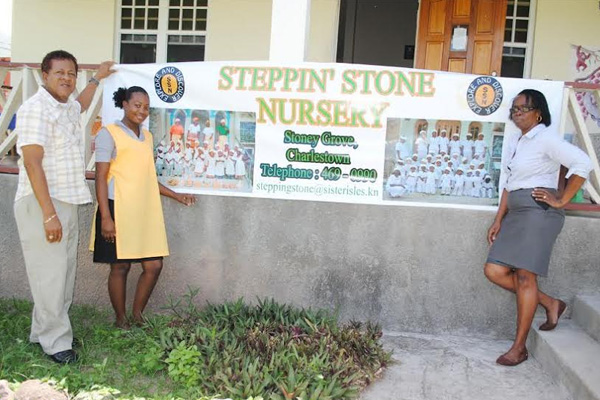 Charlestown, Nevis — A leading early childhood educator on Nevis, while supporting a stipulation by the Early Childhood Unit that a certain threshold in terms of student-staff ratio is maintained, is hailing the People Employment Programme (PEP) for coming in to her rescue and Prime Minister the Rt Hon Dr Denzil Douglas for having the vision to start PEP.

Mrs Patricia Dasent, Director of Steppin’ Stone Nursery, says that she operated from her Stoney Grove location for well over two decades, but when the new directive came into effect she was faced with the choice of turning away some pupils or to expand to a new location, which would also mean more staff members.

“At first I saw it as a blow below the belt so to speak but now I am seeing the rewards and because of the fact that the People Employment Programme is available, it has also helped me to sustain my staff,” observed Mrs Dasent.

Two trainee Early Childhood Caregivers, Ms Zanya Wilkinson and Ms Victoria Newton, were in February this year employed by the People Employment Programme in Nevis and were seconded to Steppin’ Stone Nursery.

“We now have a staff of eight, four at Phase One and four at Phase Two,” noted Mrs Dasent. “We went out into Phase Two because of the stipulations set out by the Early Childhood. If it wasn’t for the PEP Programme I would have had to cut down my roll to have the staff that I am able to maintain.

“Because of the People Employment Programme, they have made it so easy on me financially that they are taking care of two of my workers and so the work now is not as tough as it would have been if it was only the six of us.”

Mrs Dasent is thanking the Federal Government for initiating the People Employment Programme, and she is encouraging all those who are employed by PEP to take seriously the new roles the programme has given to them, because if it were not for PEP, they would be at home doing nothing.

“As to the Prime Minister, the Rt Hon Dr. Denzil Douglas, I find he is a determined man and I feel like he is following the Bible and I want to say to him, be strong and very courageous and I know he is, and his reward will be great,” commented Mrs Dasent who is fully aware that the programme was launched by the Prime Minister in December 2012.

She is pleased with the level of commitment shown by Ms Zanya Wilkinson who is based at Phase One, and Ms Victoria Newton who is based at Phase Two. Mrs Dasent, who aspires for the best in life, is ensuring that the two PEP workers learn the most they can from her and her advice to them is that they should look beyond Steppin’ Stone.

“I always tell my staff, from day one, that I love them to death,” said Mrs Dasent. “I admire the way they perform, but I always instil in them that Steppin’ Stone is not the beginning and end of their career, but I would feel fulfilled to know that wherever they go, be it St. Kitts and Nevis or anywhere in the world, that they can look back and say, thank God for the first job I had and training I had at Steppin’ Stone.

“As a matter of fact I have one of my former workers who is now residing in the US, who never failed to call back and say ‘thank you for the training you gave me’ because she is doing the same in the US and she is saying the things that she learnt, at least it was annoying to her at times, but now she is seeing the fulfilment of that training.”

Steppin’ Stone started in 1990 and will be celebrating its 25th anniversary next year. According to Mrs Dasent, who gets moral support from her media practitioner husband Mr Almon Dasent, the struggles have been rewarding especially when she sees children who passed through her care excelling in different fields.

“We started with seven children and three workers; myself, assistant caregiver and a cook,” recalled Mrs Dasent. “Out of those first seven children, I am now learning that two are studying medicine and that gives me a thrill.”

She however quickly pointed out that other jobs are not of value, but with all sorts of viruses and new illnesses people never heard of that are popping up, it is heart-warming to know that there are persons training in the field of medicine, ending by saying: “Most of the past students at Steppin’ Stone Nursery have kept themselves well and are making a positive contribution to the society.”