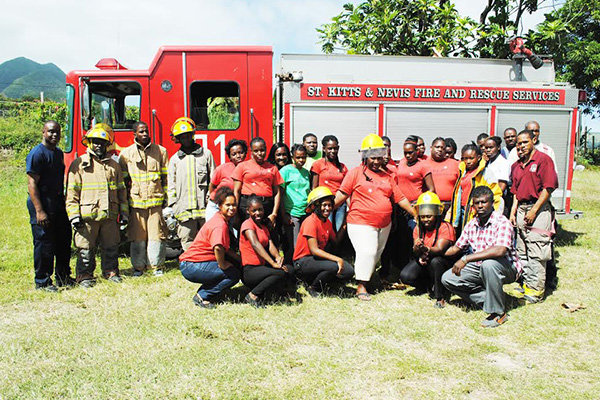 Basseterre, St. Kitts — Three of the several PEP Firemen currently attached to the St. Kitts and Nevis Fire and Rescue Services had their day on Monday February 10 when they were called to demonstrate their fire fighting skills to their colleagues who are training in the hospitality sector.

According to PEP Hospitality facilitator Ms Leslean Roberts, the class that is currently based at the St. Johnson’s Community Centre was covering the health, safety and emergency module in their training and when it came to the practical part of it, they decided to call the experts.

“We touched certain topics we had in the module, including emergency, the hazards, how to use a fire extinguisher, and the procedures to be taken during a fire or emergency but we felt that we didn’t have enough so we called in the experts to help us in a practical way,” noted Ms Roberts.

Help came in the form of Fire Sub Officer Mr Timothy Martin of the St. Kitts and Nevis Fire and Rescue Services who delivered an hour long animated lecture using a slide projector on understating the different types of fires, the hazard they pose, and how to deal with them. He even demonstrated to them how to use simple fire extinguishers.

The big moment came about when they all went outside the building and Fire Sub Officer Mr Martin gathered a large amount of dry brush and lit it. The students were then requested to call the Fire Department, and within minutes they heard sirens from an approaching fire engine, which soon swung into the compound.

On the fire truck were three PEP firemen, Mr Javion Smith, Mr Reuben Wilson, and Mr Mervin Matthew, who immediately connected a water hose and trained it at the base of the flaring fire. After it went down considerably, PEP students took a turn at working the water hose much to their delight.

“When I saw the young guys who work for PEP and who came on the truck and were outing the fire it was amazing,” exclaimed Ms Roberts. “They did a fabulous job by teaching each and every one. They took time out of their busy schedule and they taught us how to out the fire, and how to turn on the hose.”

Initially 22 PEP workers were attached to the St. Kitts and Nevis Fire and Rescue Services and according to the Acting Chief Fire Officer, Mr Everette O’Garro, they are doing well and some of them are lined up for fulltime employment once vacancies arise.

“On all accounts, those that we have on hand right now have been performing satisfactorily,” said Mr O’Garro. “We have got them involved in every day working of a fire man. In fact we have placed most of them on the regular shifts that fire officers do routinely.

“Some of them have gotten involved in performing the roles and responsibilities as actual fire officers. They respond to emergencies just like the normal firemen but under special direction and guidance from the senior fire officers.”

Mr O’Garro noted that all those PEP persons working at the Fire and Rescue Services had already signalled their intentions that they want to become permanently enlisted to the department, adding that they are involved and have shown a high level of interest in the work.

“I would recommend them for positions when they are available,” revealed Mr O’Garro. “We have already collected files from a number of them, getting information on them that we used in respect to enlisting them and they have already been forwarded seeking consideration for them to become full members within the organisation.”

Three women PEP fire officers had initially been seconded to the Fire and Rescue Services but one left and two remain. One is stationed at the RLB International Airport sub office while the second one is at the head office.

“They (female PEP fire officers) perform duties similar to the regular female fire officers, where they basically do reception duties, working in what we call our ‘Alert Room’,” explained Mr O’Garro.

“This is where they would answer phones, record information in the dairies and reporting books and stuff like that. Basically they take information on emergencies, answer all calls and do proper recording of such, and we are satisfied with their performance.”

Woman PEP Fire Officer Ms Shaneice Duporte said that she chose to become a fire officer because the work appeared interesting to her as it helps other people. She thanked the People Employment Programme (PEP) and the Government of St. Kitts and Nevis for giving her, and others in PEP, that opportunity.