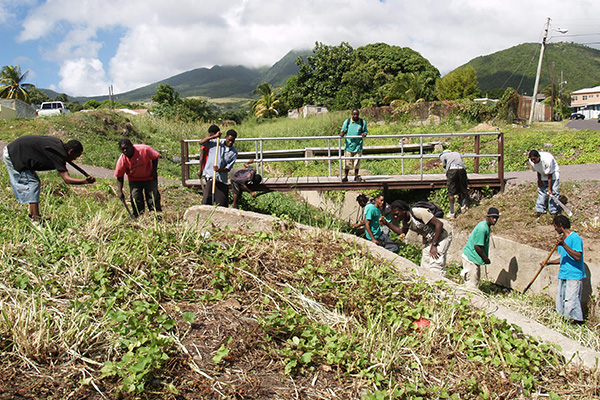 PEP has added value to the art of grass cutting, says Parks and Beaches supervisor

Basseterre, St. Kitts — For a country whose main industry is tourism, Mr Damian Maynard a supervisor with the Parks and Beaches Unit is saying that he is proud of the job he does because it has contributed to the Federation being classified as a premier tourist destination.

“I have been working for the Unit for ten years now and it is something that I really enjoy doing because when you look at the main industry today is tourism and the Unit plays a real role in keeping our country beautiful in terms of the landscaping, and cleaning the beaches,” observed Mr Maynard.

Mr Maynard who is in charge of the group that looks after the core of Central Basseterre says that his gang has since last year received a major boost with the posting of workers from the People Employment Programme (PEP) who not only came with the manpower, but also with great ideas.

“I have learnt a lot from them,” he confessed. “Some of them come and give me ideas, for example the Westbourne Ghaut. The ghaut is not something I was looking at to clean, and one day two of them said, ‘look boss, man I think we should clean the ghaut you know.’

“I gave them the benefit of doubt and said, yes, let’s see what we could make of it, and we went down and we started to clean it and a lot of people now come and say, wao!, we see the change, in terms of how beautiful it looked before and now.”

According to Mr Maynard, another group of PEP workers at New Road had brought a whole new concept to the art of landscaping, when they cleared a space that used to be covered by tall grass and now have a sign made of small stones, saying ‘welcome to New Road’.

“The fellows from PEP are doing a wonderful job and I would like to applaud (PEP Project Manager) Mr Geoffrey Hanley and the Government for initiating such a programme because I too came out of a programme called Enhancement Programme in 2004,” said Mr Maynard.

Looking at the People Employment Programme, the supervisor said that it is better than the one that introduced him to the world of work, and accordingly he is of the opinion that those in PEP have a much brighter future.

“I would say that the government has made a tremendous contribution in terms of the working people; people who never thought they could have a skill or a job,” observed Maynard. “Now they can say that they have a skill because cutting grass is not just cutting grass, it has a whole concept and there is skill to it.

“There is no job that restricts anyone because ain’t everybody can use a weed-eater, ain’t everybody can use a machete or cutlass and some people look at their work like, it is just a machete that is chopping the grass. But when it is all said and done, that is a skill… when you look at pruning trees, it is a skill that should leave people saying ‘wao! this fellow is doing a good job’, because you require a skill to prune a tree or cut grass for that matter.”

Cutting grass is a career with bright prospects and that is the message he has been instilling in the PEP workers, who he has noted are very receptive of what he tells them. He said that he attended a short course in Leadership and Beautification at the Clarence Fitzroy Bryant College.

“That was in 2007, and I was one of those persons who actually successfully completed that course and now I have a piece of documentation that can put me a little more forward when development comes in terms of more hotels and so forth for landscaping,” said Mr Maynard.

He took time to thank his boss, Mr Daniel Henry, Coordinator of Parks and Beaches Unit who “does a marvellous job here and I would like also to acknowledge the minister, the Hon Marcella Liburd (who has responsibility for Health under which the Unit falls), who causes us to do wonders in this Unit, and the Deputy Coordinator, Mr Geraldo Herbert.”

According to Mr Maynard, the collaboration between the Parks and Beaches Unit of the Ministry of Health, and the People Employment Programme (PEP) has made their team stronger because PEP workers love their job a fact which is manifested by their creativity in the art of landscaping.