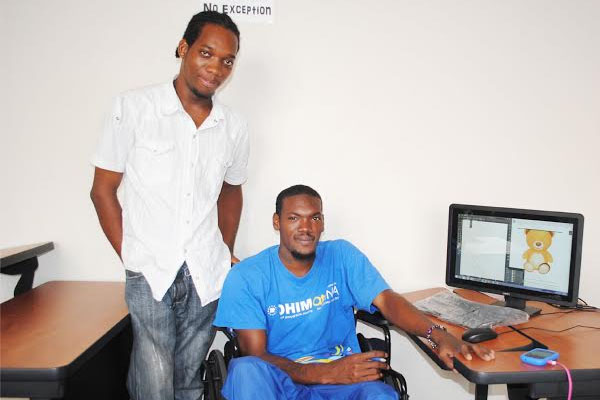 Basseterre, St. Kitts — The Federal Government of St. Kitts and Nevis, through the People Employment Programme (PEP), is being praised for its proactive approach to life as it ensures that no one is left behind irrespective of their physical ability.

When Prime Minister the Rt Hon Dr Denzil Douglas launched PEP in December 2012, he assured that it would address the needs of all persons. It was in conformity with the Prime Minister’s wishes that PEP’s Project Manager Mr Geoffrey Hanley reached out to persons with disability.

Twenty-one year old Mr Jamal Herbert of McKnight is one such person who reports that after being turned down several times because of his disability when he expressed his wish to become a mechanic, PEP has proven to him that disability is not inability.

Today he is one of the several persons living with disabilities who are proudly training at the McKnight Community Centre, under Mr Anthony Mills, to be a computer graphic artist. Mr Mills, who is now engaged as a PEP Facilitator, is also the President of the St. Kitts-Nevis Association of Persons with Disabilities.

Always wanting to do something challenging, Mr Herbert joined the Advanced Vocational Education Centre (AVEC) “to try to further my education in mechanics, but the teacher there tell me that I could not make it because of my disability, and so I had to choose graphic design, but they did not have the software, so I had to leave.

“After I left AVEC, I used to come down here (McKnight Community Centre) and Tony (Mr Anthony Mills) used to show me how to do things on the computer using Illustrator and Photoshop, and then the PEP people started to help us out.”

Before Mr Herbert joined PEP he used to sit about at home just watching TV. He said that apart from the times he would come to the community centre, he used to go out to look for jobs but most of the places he went they would tell him that the job entailed too much standing, or too much walking, or eventoo much lifting things.

“I am happy about PEP,” said Mr Herbert. “It is a good programme that is assisting young people like me and others.When I am through with this course, I plan to open my own business or continue working along with Tony.”

At the time of this interview, Mr Herbert was instructing his fellow trainees and when asked whether he was the teacher, he said: “I am part of the PEP team and I am learning graphic design. I was teaching them how to draw a ladybug, it was just that today. Tony was in a meeting so they tell me to go in front and show them how to do something.”

Wheelchair-bound Mr Antonia Richardson of Prickly Alley in Basseterre led a normal life until a freak accident over five years ago left him paralysed. He was put on Social Welfare, where he received $250 a month, which he said was not enough taking into consideration that he had a life to lead, and a daughter to take care of. But life changed when he joined the People Employment Programme computer graphic class at the McKnight Community Centre.

“PEP has taken me from the stage of social welfare where I was getting nothing to say, just $250 a month, to where I am now getting a minimum wage which has recently been raised to $360 a week,” said Mr Richardson.

“I have got a child and other things to do, so I figure being in this programme is a little better because I make more than $250 a month. On top of that, I am learning a skill that I will use for the rest of my working life.

“I am planning to start my own business, making T-shirts, picture frames and other things. My training is preparing to get to that stage of life. PEP is a good thing, I won’t bring it down. It is a good thing because some of us were just out there sitting down doing nothing, collecting $250 a month which is not much, so with PEP you could make a little more for yourself while knowing that at the end of it you will be empowered.”

According to the facilitator, Mr Anthony Mills, the training programme which is sponsored by the People Employment Programme is teaching people with disabilities, adults and young people, graphic designs and Microsoft Office, with a focus on Microsoft Word.

“We are teaching them so they could become independent, as we are also trying to teach them money management and basic life skills so as to get them prepared for independence,” said Mr Mills.

“We have people who are learning, and are getting good at what we are trying to teach them. We are teaching them graphic design mainly. We could see the improvements and you could see the work that they do. So I know there is a lot more to report than the last time.”

The PEP-sponsored group at the McKnight Community Centre has 18 persons, made up of two facilitators, Mr Mills and Ms Mary Clarke, 11 trainees and five support staff.

“Most of the trainees are still in the beginning stage because graphic design is a big field you do not just learn it just so, but they are getting good,” observed Mr Mills. “Based on how we run the programme, we have some of them in the part two of the programme right now.

“We just went from one to two, but some of them are still in part one and then it is not all of them who are learning graphic design though, as right now we have two blind people and they are learning to operate the computer using the JAWS (Job Access With Speech)software, they are learning Microsoft Word.”