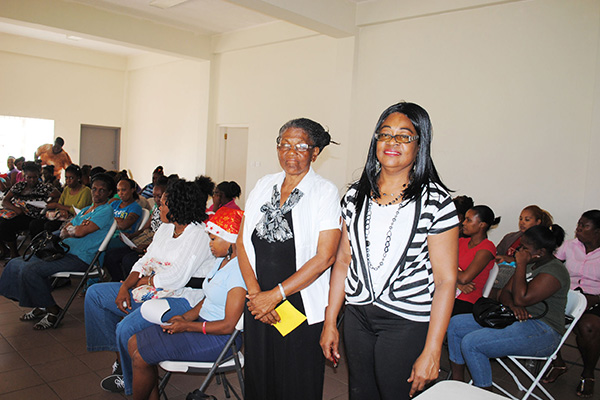 Basseterre, St. Kitts — An official at the Early Childhood Unit in St. Kitts is of the opinion that the Federal Government of St. Kitts and Nevis’ initiated People Employment Programme (PEP) is a step in the right direction as it empowers persons, notably the youth, in their fields of choice.

“I want to commend the Prime Minister (the Rt Hon Dr Denzil Douglas) for this because you can give a man a fish and he has fish for a day, but you teach him how to fish, he learns how to fish all the time,” said Ms June Wallace, a resource teacher at the Early Childhood Unit. “That is what PEP is all about; teaching them how to fish and finding their niche and they are getting it.”

Ms Wallace made the remarks on Thursday December 12 at the Newtown Community Centre in Basseterre, where she is facilitating a two-week workshop for PEP sponsored nursery caregivers and pre-school assistant teachers who are working at the various day care centres and pre-schools around St. Kitts.

“What I will be doing is to ensure that they are attending regularly and that the workshop goes well,” noted Ms Wallace. “Some are in training and so at the end of the training they will be doing an exam, and Mrs Vanta Walters is the person who is training the early childhood personnel.”

According to the Early Childhood Unit official, the PEP sponsored early childhood trainees at the Newtown Community Centre have learnt a lot in the short time they have been under Mrs Vanta Walters, the former Early Childhood National Coordinator for St. Kitts and Nevis, and are coming off much better than if they would have gone to the centres to work before the training.

“They are gaining skills and knowledge and later on they will be going into centres and they will be doing an internship, where they will now practice what they have learnt,” observed Ms Wallace.

“So what the People Employment Programme is doing is really empowering them to become early childhood practitioners, and as a result of that we have seen that the ladies are really taking the information and are they are really running with the ideas.”

After their training, which will prepare them to sit exams for the Caribbean Vocational Qualification (CVQ) competency, it is anticipated that some of them will be working permanently with the Early Childhood Unit, and the more enterprising ones could open their own centres or even seek employment elsewhere in the region.

“Today (Thursday December 12) Ms Gloria Mills (a PEP facilitator ) her topic would be on work ethics and how to conduct themselves in the workplace, what is required of them, and what are the standards that are required when one is working at early childhood day care centres,” commented Ms Wallace.

“Tomorrow my topic I will feature on early stimulation, ‘how do you stimulate the infant’ so that they would be ready for learning. The workshop opened on Tuesday December 10 and will end on Friday December 20. There are about 100 very lively and eager to learn participants.”

According to PEP Training Coordinator, Mrs Celia Christopher, the workshop at the Newtown Community Centre has been organised at this time because the day care centres and pre-schools where they work have been closed for the Christmas period.

A similar workshop is taking place at the Basseterre High School to cater for PEP sponsored teacher assistants in primary schools around the island, now that the schools have been closed. This workshop is being coordinated by Ms Joann Kelly, and facilitated by PEP appointed facilitators.

“The Ministry of Education has worked very closely with us in designing their training,” noted Mrs Christopher. “So that training is taking place and both trainings are going to take place over a two-week period.”