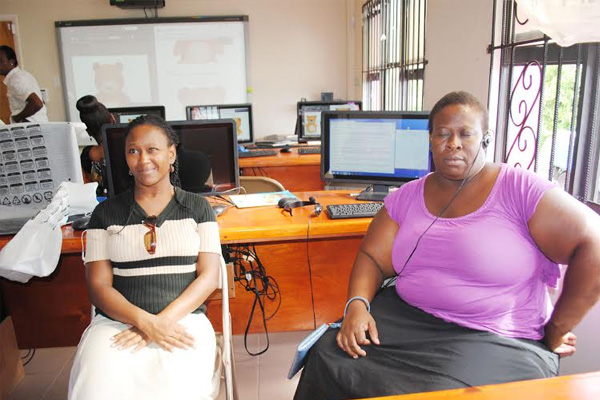 Basseterre, St. Kitts (November 17, 2014) — An official of the St. Kitts-Nevis Association of Persons with Disabilities (SKNAPD) is outlining the profound opportunities that have been made available to its members as a result of a partnership with the People Employment Programme (PEP).

According SKNAPD’s secretary Ms Mary Clarke, part of the association’s mandate is to ensure that persons living with disabilities are able to integrate with the greater society and be able to stand independently as they fend for themselves and their families, and hence the various trainings the association provides to members at the McKnight Community Centre.

When Prime Minister the Rt Hon Dr Denzil Douglas launched PEP in December 2012 as the vehicle that the Federation would use to tackle unemployment by offering training at various levels for the youth, the association jumped into the band wagon as they did not want their members left behind.

“I approached PEP’s Project Manager Mr Geoffrey Hanley and I told him about the blind and the disabled persons that we have at home and he willingly jumped on board and helped us to get everything along with the Australian government who funded the computers, and also the SIDF,” said Ms Clarke. “We want to say a big, big thank you to PEP because had it not been for PEP we would not have gotten this done.

“I want to tell the public out there that PEP is not just for some. It is for all. And for them to work along with us as persons with disabilities, the St. Kitts- Nevis Association for Persons With Disabilities, we want to wish PEP all the best that life can offer to them, to make sure that they continue to do the good work that they are doing.”

The St. Kitts-Nevis Association of Persons with Disabilities has two special trainees who are visually impaired, Ms Sharon Fredrick and Ms Letitia Murray, who are learning how to use computers and who are on the People Employment Programme, which is also paying them the minimum salary as they undertake the training.

The two lost sight in their adult lives and according to Ms Mary Clarke who is also a PEP Facilitator along with the President of the association Mr Anthony Mills, the two blind ladies were trained by an expert computer instructor from Antigua, Ms Lisa Hickson, who is also blind, at a two week training workshop held in April this year.

Ms Clarke spoke highly of Ms Sharon Fredrick, who is the mother of four and who lost her sight as a result of a freak accident. After learning to use the JAWS (Job Access With Speech) software specially programmed for use by the blind, Ms Fredrick is assisting visually impaired children from the Cotton Thomas Comprehensive School.

Ms Fredrick is credited for using a computer software that enables her to hold conference calls with associations for persons with disabilities in the entire Caribbean. She is also assisting Ms Letitia Murray, who is doing her stage one, with the JAWS software.

“Sharon is a motivator and she also is a very good chef, and I know from this programme she is going to motivate herself more, and Sharon is going to come out on success, because she is committed and she really enjoys what she does,” observed Ms Clarke

“We are trying our best to do everything possible we can to help them because we know how it is. It is not easy being blind, and we really want to make sure that at the end of their PEP programme training, they can go back home and they can be an inspiration to their family instead of being dependent on them.”

Ms Fredrick is currently learning how to use a new software for visually impaired persons, NVDA (NonVisual Desktop Access), which is a potable screen reader for Microsoft Windows. It is a free software which she downloaded on her computer from the internet.

“When I finish with this course, most likely the more skilful that is what I am trying to be good at and teach others my skills,” explained Ms Fredrick. “I would also love to have an office job, but I am more interested in passing on the skills that I would have learnt to people in my field – people who are blind and visually impaired.

Ms Letitia Murray, 29, says she lost her sight in 2006 due to a strain in her eyes, but quickly adds that it is no hindrance to her ambitions, and especially now that the People Employment Programme is giving her the opportunity to move ahead.

“I would like to be radio Deejay,” said Ms Murray. “This training will assist me in achieving my goal – The equipment; know how to be on the computer. The voice; done there already – attractive. I like music, so I think if, for me being on a radio station it will educate you, not just playing the radio, you get information from outside and you give out information too.

“PEP is good and I am happy for it, and do the good work and I hope this could continue on, and on, and on because again, for some people who if the programme finish will have to go back and sit down and do nothing, so it is better if the programme continues to improve other people skills, their thoughts and mind and everything that encompasses the human being.”