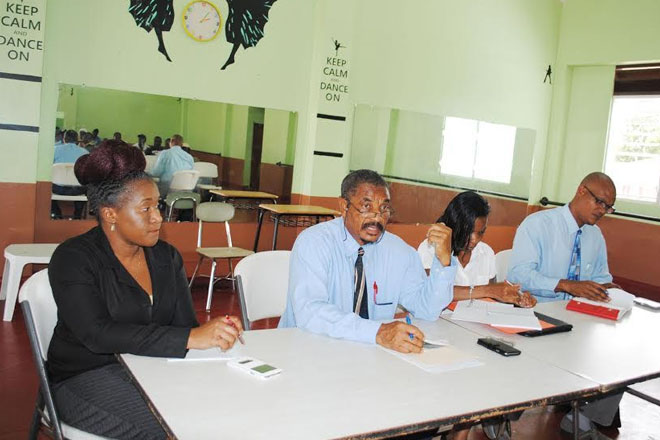 PEP is not closing but needs to be revamped and redirected, says DeSuza

Basseterre, St. Kitts — Permanent Secretary in the Prime Minister’s Office, who also has responsibility for the People Employment Programme (PEP), Mr Osbert DeSuza, advised Wednesday June 24 that the programme is not being stopped as many have been saying.

“When you have a programme that employs I think 2,800 persons you cannot just stop that programme,” said Mr DeSuza. “There will be a lot of social repercussions to that.”

Mr DeSuza said the programme needs to be revamped, and redirected as it needs to go along a direction where the government would be getting value for money.

He was responding to issues raised by some of the 49 PEP supervisors working under Parks and Beaches Unit of the Ministry of Health in a meeting purposely called to listen to their concerns that was held at the Victoria Road Community Centre.

Quoting Prime Minister the Hon Dr Timothy Harris who in his last Press Conference had reported that $130 million had already been spent on PEP, Mr DeSuza said: “The government has to get value for money from all the investment that it is making.”

He told them that it was not a problem for the government to use its resources to keep people employed regardless to how little the wage might be, as government also has a responsibility to ensure that employment is generated for persons.

The Permanent Secretary was accompanied by Mr Geoffrey Hanley PEP Project Manager, Mrs Janet Cable who has recently been attached to the PEP office, Ms Sahira David PEP Accountant, Ms Delcia Blaize, a clerical officer in the Office of the Prime Minister, and Mr Daniel Henry, Coordinator of Parks and Beaches Unit in the Ministry of Health.

This is the second meeting in as many weeks that Mr DeSuza would have held with persons working with the People Employment Programme. Friday June 19 at the Ministry of Agriculture Conference Room in the Government Headquarters, he held a meeting with the PEP office and field staff where he introduced himself to them and they introduced themselves to him. At the same meeting he introduced Mrs Janet Cable.

At the Victoria Road Community Centre meeting, Mr DeSuza sought to know about PEP workers under the Parks and Beaches Unit, as he always had the impression that they were all under the Ministry of Health.

Unit’s Coordinator Mr Daniel Henry clarified by stating that 130 permanent staff members at the unit are under the Ministry of Health, while 714 PEP workers are managed from the PEP office and that they are spread in 50 groups in all the villages in St. Kitts, with same large villages having as many as four gangs, each of them headed by a supervisor.

In replying to queries raised by the PEP supervisors, Mr DeSuza stated that there was a general perception and a general feeling that some of the persons who work on the PEP do not really produce any work.

“The issue of persons not turning up to work and then having their time sheets submitted to the PEP office has always been a concern,” observed the Permanent Secretary. “There is also information that some people who are assigned to the PEP at some institutions don’t turn up to work, but at the end of the week a time sheet is submitted for them and they get their wages. That I think is a total waste of government’s money.”

He said that he will arrange a number of community meetings with some of the PEP workers to explain to them that if they are not prepared to work, that they cannot be on the PEP. The government, he added, cannot be wasting money by paying people who are not working and he asked the supervisors to talk to persons under them for them to understand that people need to go to work.

Mr DeSuza also talked about the level of indiscipline among PEP workers that he would have seen and heard which he said left a lot to be desired. He told the supervisors to ensure that persons working in their gangs showed some level of respect, and reminded them that there was a form at the PEP office in which they could use to raise such complaints.

“If you are constantly undisciplined, and you do not intend to change, you must also be asked to leave the programme,” stated Mr DeSuza. “And please do not sign any time sheets for people who do not work – you can’t encourage that. You will not like it for yourself if you run a business, so please do not do it to the government and the country.”

He however told them that they were doing a good job in keeping the environment clean, preventing overgrowth, and making the place look well presentable in a number of areas. He singled out the gang working in the College Street Ghaut which has done very well in cleaning the ghaut.

Supervisors raised the issue of tools that had been bought from overseas for use in their work, which they said were not of the required standard. Mr DeSuza expressed concern that items were bought from overseas instead of generating business for local companies that would be stocking similar items.

“It might be true that they might be able get them a little cheaper outside,” explained the Permanent Secretary. “We need to start to support local businesses to help them to grow. So you spend your $3 million on tools under PEP, you are spending $200,000 and the rest $2.8 million outside, that is not good at all.”

In closing Mr DeSuza told the meeting that in time the authorities will make some pronouncements about the direction of PEP, what they expect, and the streamlining of the programme especially after he learnt that some persons within the programme have being training for well over two years.