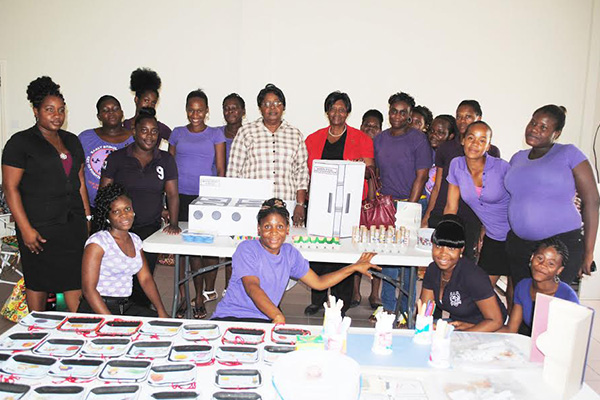 Basseterre, St. Kitts — Retired Director of the Federal Early Childhood Unit, Mrs Vanta Walters, is praising the People Employment Programme (PEP) for addressing an anomaly that had existed at the unit over the years.

According to Mrs Walters, in all its existence the Early Childhood has been hiring untrained teachers for the nation’s day care centres and preschools, and would only have them trained after they would have worked with the children for a period.

“When the PEP Project Manager Mr Geoffrey Hanley called me and asked me whether I would be willing to come out of retirement and do the training course, it didn’t take me long to say yes because I saw it as an opportunity for me to contribute to the development of the nation’s children, and human development,” said Mrs Walters.

She noted that the practice that they had was to employ the teachers and that by the time they were ready to train them the teachers would have been in the centres caring for children for a year or two or even three years before going for the orientation.

“So if I am training a group of 26 girls, at least the Early Childhood Unit would have a pool of trained people from where they can select,” commented Mrs Walters. “If in case there is a vacancy anywhere they come to this pool and select somebody from there.”

The 26 PEP workers are currently training at the Challengers Community Centre and Mrs Walters, who is now the official PEP Facilitator for Early Childhood, said that she was very pleased at the progress that they have made.

“The satisfaction that I am getting in this course is the fact that the end product we are hoping that as many of them as possible would have the necessary competency to obtain a regional certificate,” she observed.

The People Employment Programme is looking at certifying the prospective teachers (and all PEP trainees in other fields) at the Caribbean Vocational Qualification (CVQ) level, with which they could get employment within the region, but if they were to obtain a local certificate they will be better equipped to work with children in the day care centres and preschools.

Mrs Walters worked in Early Childhood all her life having taught at primary schools in kindergarten and grade one and grade two for twenty years rising to the positions of acting head teacher, head teacher, to head of the infant department.

“When they had the vacancy to have an early childhood coordinator in 1990, they promoted me to be the coordinator and I retired in 2010, a little over 20 years coordinating the entire childhood programme in St. Kitts and Nevis and then with the creation of PEP they called me to ask me if I would want to train a group of girls in early childhood,” concluded Mrs Walters.

A PEP Early Childhood trainee, Ms Roseline Drew, said that the People Employment Programme has not only opened new doors for her and the other trainees, but it is greatly contributing to the overall development of the Federation of St. Kitts and Nevis.

“Before I joined PEP I was working at an ice cream place in town and then I came here to the PEP,” said Ms Drew. “Early Childhood was not my first choice, but I do not regret it at all because what I have been learning has been very good as I now appreciate children more.”

Ms Drew who is a mother of two noted that they were not just learning about children, as Mrs Walters was teaching them about life in general and that way she and the others in her class are now fully equipped to face the world with confidence once the course is over.