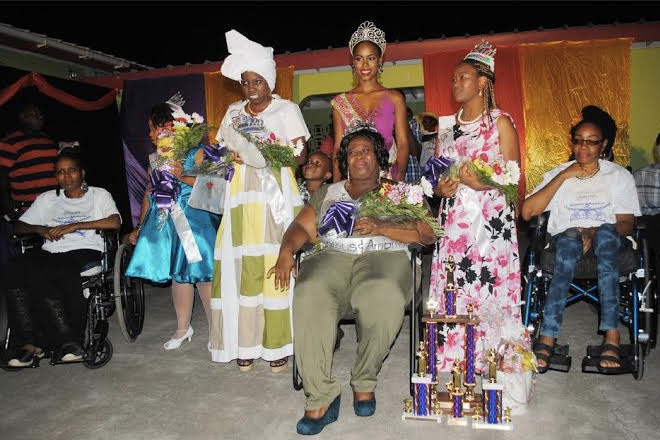 BASSETERRE, ST. KITTS — It was a show that lived to its billing, and at the end of it Ms Sharon Dasent was on Saturday evening (September 12th) declared the first Miss Prestigious and Ambitious after amassing a total of 349.5 points in the show that was organised by the Women’s Network of the St. Kitts and Nevis Association of Persons with Disabilities (SKNAPD).

A People Employment Programme (PEP) participant in the Computer Graphic Design, Microsoft Office, and Craft-making group at the McKnight Community Centre, Ms Dasent edged out her fellow PEP participant, Ms Monique Pemberton who scored a total of 343.5 points for the first runner-up position.

The other two contestants were Ms Latisha Murray and Ms Erica Rouse. An ecstatic chairperson of the SKNAPD’s Women’s Network, Ms Petra Pringle, said she was impressed by their performance and promised a second show next year. She was accompanied by the Secretary Ms Travia Douglas.

“They were amazing,” said Ms Pringle. “I really enjoyed and I was shocked to see how they came out and performed. It was excellent, I had a great time. It was worth the while to do it, to alert people that we are not just to stay at home, we are people, we have feelings, we are to be loved, and live a normal life. Nothing is wrong with us.”

Ms Pringle said she was grateful for the People Employment Programme which is training members of the association, including the four pageant contestants. “I am grateful at least through PEP they know that they could do something even though, and earn a living despite whatever disabilities they have,” she added.

The show which was held at the St. Peter’s Community Centre had three judges, Mr Khrystus Wallace, Ms Unoma Allen, and Ms Jessica Jeffers. It was held in three judged sections, Promotional Speech, Performing Talent, and Fashion of Yesteryear. A fourth section, Miss Photogenic, was judged by members of the public on Facebook.

A large and orderly crowd had gathered on the outside lawns of the St. Peter’s Community Centre, and some people who could not afford to pay the token entrance fee watched the show from behind the perimeter fence.

Hosting the show was Entertainer Purple (Ms Judy Dupont), and the house band was Fingers and Toes. There were also performances by the SKNAPD Vice President Mr Joseph Bergan whose stage name is The Navigator, Sylvester’s Masquerades, and Mr Kobe Wilkenson.

Ms Petra Pringle and Ms Travia Douglas of the Women’s Network of the St. Kitts and Nevis Association of Persons with Disabilities distributed the various awards to the contestants, while crowning the new Queen was the reigning National Miss Carnival Queen, Ms Tishima Browne.

Representing the People Employment Programme was Pastor Keith Warner who is a Guidance Counsellor. He was requested to deliver the invocations before the start of the show and to invoke God’s blessings.

On Monday Morning (September 14th) Pastor Warner visited the PEP group at the McKnight Community Centre for the usual counselling services and he took time out to congratulate the four brave contestants, telling them that they were all winners.

“I counsel PEP participants with disabilities at the McKnight Community Centre,” said Pastor Warner. “I believe this pageant has helped them to build their self-esteem. Some of them were not persons who could talk out in public, but it has really helped them to come out and really to show their talents. It was helpful to them.”

The newly crowned Miss Prestigious and Ambitious Ms Sharon Dasent said that she had taken part in the pageant to enjoy herself. She observed that her winning talent was based on people who ignore a person with disabilities, whom she told: “I have news for you, I might have a disability but I am going to show you that I have ability.”

Ms Dasent, who lost her sight in adulthood, said that she initially was depressed but decided to turn things around by thanking God for giving her life, and she started building up her self-esteem, which was boosted when she joined the PEP group at McKnight where she enrolled to learn computers.

“PEP has given me an opportunity to overcome my inability, to show people that I have ability,” noted Ms Dasent. “I am now through with my course, but I am still with the PEP group because I am teaching two blind students, one in our group and the other from the Cotton-Thomas Comprehensive School how to use computers.