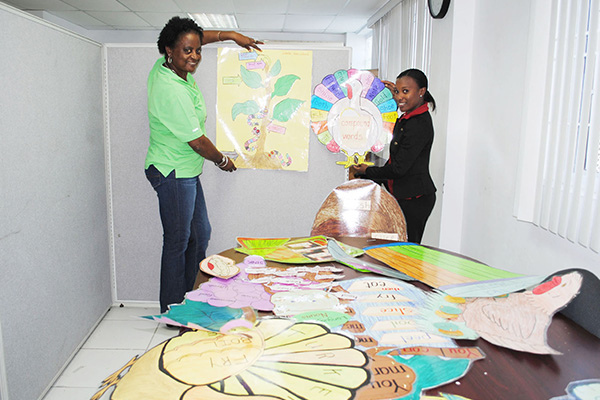 Basseterre, St. Kitts — As the People Employment Programme (PEP) continues with its innovative ways of ensuring that the talents of young people in the Federation are utilised appropriately, members of the teaching fraternity have hailed the introduction of Teaching Assistant Officers in schools.

The first Teaching Assistant Officers who were carefully selected and employed by the People Employment Programme were deployed to the various schools in St. Kitts in the month of September last year.

In December when schools closed, they assembled at the Basseterre High School for a two-week workshop to sharpen their skills in preparation for the new school term in January. One of the facilitators was Mrs Emileta Warner-Paul, Principal of the Beach Allen Primary School in Basseterre.

The Beach Allen Primary School has seven Teaching Assistant Officers, of whom one is assigned in the office and another in the library while the rest are in the classrooms.

“They came in at a time when we were having several workshops, and they were able to keep control of the children,” noted Mrs Warner-Paul. “They were not allowed to do any teaching even though in some schools some of them are into the teaching.

“If the teacher is not there, they have to take over, so they end up doing some teaching, but they do not have the training, so the supervising teacher for the grade would give them some work to do for the children and then they just oversee the children doing the work.”

She hoped that Teaching Assistant Officers would be a permanent feature, especially in the very large schools, where some classrooms have over 20 pupils as the assistant teacher are needed so that the teacher can maximise the planning, as sometimes teachers need to meet to plan.

“So when the teachers meet to plan the students are not left on their own, they have their assistant teacher and at that time now that it becomes a prominent fixture when they leave to go and do their planning, the teacher for that particular class can now use that period as a remedial period, so she/he would leave work and the teacher assistant just goes around and assists the students with their work,” said Mrs Warner Paul.

The workshop which was held between December 10 and December 20, and attended by 110 Teaching Assistant Officers, was coordinated by Ms Joann Kelly, a TAO doing Secretarial skills at Edgar T. Morris Primary School in Tabernacle.

“The TAO training was hosted in collaboration with the Ministry of Education, firstly because of closure of schools, which would have meant that the TAOs would have been on vacation for four weeks,” noted Mrs Pemberton.

She said that the training was supposed to have taken place last September before they went to the schools, but because of reasons beyond their control it was arranged for December, where Mrs Clarice Cotton, the Chief Education Officer, was instrumental in putting the topics together and also ensuring that they had the proper facilitators for the training.

One area where the TAOs excelled was in Chart Making and Manipulative Making session which was facilitated by Ms Paula Tota from the Teachers Resource Centre, Ministry of Education. The charts made by the TAOs were later displayed at the PEP Secretariat in Dorset.

“What I am looking at here right now is excellent work put on by the Teaching Assistant Officers, and I must say that just looking at the display here, it has exceeded my expectation,” said Mrs Agatha Caines, PEP Office Manager.

“It just goes to show how much talent we have just lying around there, people we do not know… we see people just moving around we just do not know what they can do, and when you put them to the test, and then you really see really and truly what they can do. PEP is assisting, it is a beautiful thing, it is a good programme, it brings out a lot of talent in various ways to different people from different walks of life.”