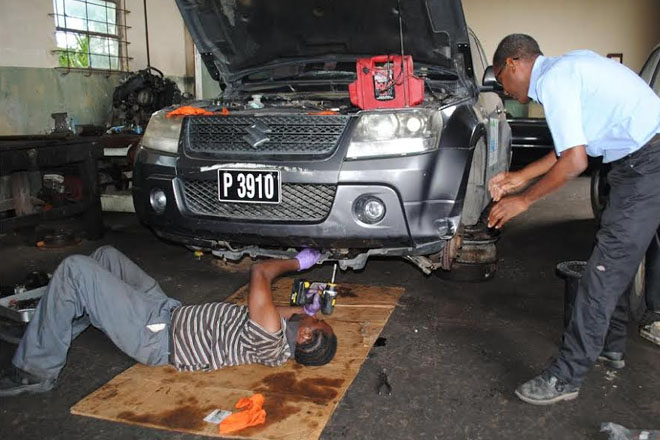 Basseterre, St. Kitts — The Mechanical Division of Government’s Public Works Department is playing a vital role as the economy of the Federation of St. Kitts and Nevis grows.

When the economy of a country grows, a much noticeable effect is the increase in the number of persons owning vehicles and related heavy equipment. These vehicles need continuous quality maintenance if they are to operate at an optimum level.

Foreman at the Public Works Mechanical Division Mr Valentine Fraites said that while their mechanical shop which is situated along Wellington Road in Basseterre only handles government vehicles, in collaboration with the People Employment Programme (PEP) it has made its contribution to the winder motoring public by offering training to mechanics.

“We started out with seven PEP trainees,” explained Mr Fraites. “Right now we have only three as four have already moved on to other jobs. After they received quality job related training, four of them have gotten jobs elsewhere so they left.

According to Mr Fraites, who was at the time of the interview acting as the manager since the substantive manager was on leave, when the seven trainees were seconded to the Mechanical Division by PEP, they were exposed to a lot more vehicles and in so doing had gained more knowledge compared to when they first came.

“I try my best with them and I try not to hide anything from them and what they do not know, I try to sit them down and tell them this is the way it is done,” explained Mr Fraites. “They are really willing to learn. They see something they do not fully understand and they are willing to ask, and I would give them the way it operates; to take it down, and to put it back together.”

38-year-old Mr Delvin Evans, who joined PEP in October 2013, is one of those who had come with a mechanical background as he is certified as a mechanic, from the Technical College at the Clarence Fitzroy Bryant College (CFBC). He had left the then Sandy Point High School in fourth form and worked as mechanic briefly before joining the CFBC.

“After college I first went to do something else and then I went to do mechanics,” explained Mr Evans. “By the time I went to PEP I had been out of a job for five months. I asked them for a fitting so they asked me what I wanted to do and I told them mechanics and they sent me here. I have now gained the experience of working on the trucks and heavy equipment which I was not exposed to before.”

During the interview, Mr Evans had to come from under a vehicle he was working on. In explaining what Mr Evans was doing, the foreman stated that he (Evans) had taken down the sub frame and the bottom part of the vehicle so as to put in new bearings adding that he was working under the supervision of a senior mechanic.

“My attachment here has been very helpful,” said Mr Evans. “PEP helped me out in a lot of ways because as you see I was out of a job for five months and after knowing what I could do, they brought me to the right place. No mechanic would ask for anything better. Apart from PEP giving me a wage to help me to pay my bills, I have been able to learn certain things that I did not learn in college.”

The other two PEP trainees Mr Michel Nicholas and Mr Jared Bedminister, both ex-students of the Washington High School, were busy working on a backhoe under the supervision of Grade One Mechanic, Mr Eric Monzac who said that they have been progressive in their training and were making proper use of their time there.

“The opportunity that I got of coming to the Mechanical Division has increased my skills more, because I am not formally educated in this field,” noted Mr Nicholas. “I had to try my best to get some experience for myself in terms of calling the shots. A man with skills is the man who calls the shots, so it is something that I always wanted to do as a mechanic. So coming to the Mechanical Division was a plus for me.”

After leaving school, Mr Jared Bedminister busied himself by working as a mechanic at a private garage in Monkey Hill. When he heard of PEP he applied and informed them that he wanted to work as a mechanic, and on acceptance was seconded to the Mechanical Division.

“Since I have been here I have learnt a lot,” said Mr Bedminister. “It has made a big difference. Some of the things that I did not understand before, I now know them. I have learnt how to operate a couple of machines. Because of PEP I have been exposed to what I have always wanted to do. I am learning more and my education in this field is expanding.”

What is the future of the three PEP trainees still at the Mechanical Division?

“Myself and the manager have already sat down and spoke concerning them,” answered Mr Fraites. “If we have a vacancy or even vacancies, we would employ them, but that is not in our hands to take a decision. Quite naturally, if it becomes that we get a vacancy and we have been asked that question, we should be able to answer that question – If it is we have to take the three of them, well, so much the better. The more hands we have the better for us.”

Senior PEP Field Officer Mr Jason McKoy confirmed that the Mechanical Division of Public Works Department has treated all the PEP trainees attached to them like they are their own employees and observed that the experience the trainees have received there will make them stand on their own in future if there will be need to do so.