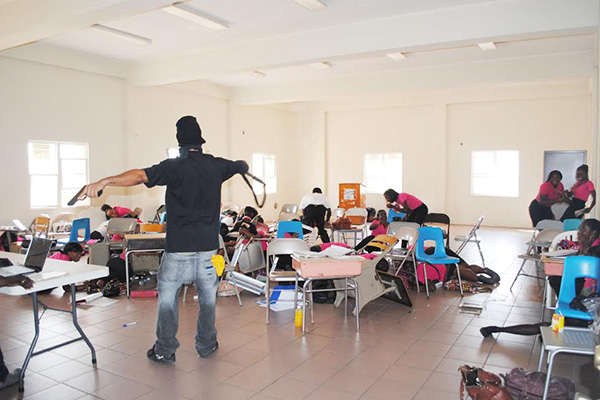 Basseterre, St. Kitts — The Newtown Community Centre is home to two of People Employment Programme (PEP) training classes, and while the participants reported for classes on Tuesday (January 28) and Wednesday (January 29) as usual, little did they know that business would not be as usual.

As the facilitators (Mr Dominic Stevens, Mr Jason Morton, Ms Joan Millard and Ms Orngele Erskine of the Hospitality Division, and Ms Juliette Queeley, Ms Amoy Arache and Ms Petra Newton of the Cosmetology Division) are readying the trainees to be certified, they realised that a component that involved practical interaction with the real world was still outstanding.

“PEP has now introduced TVET and CVQ standards, and based on the teaching modules which we got from the TVET and specifically those dealing with health and safety hazards, we realised there are activities in there that must be performed as role plays,” explained Mr Stevens.

To achieve this goal, and unknown to the trainees, Mr Stevens arranged with officers of the St. Kitts and Nevis Fire and Rescue Service to come on Tuesday in the morning to execute a surprise mock fire drill.

In the afternoon the trainees went through a First Aid session that was conducted by Mrs Natalie Fough and Mrs Sharon Warner-Balbosa from the St. Kitts and Nevis Red Cross Society. It was an incident free session in which cosmetology trainee Ms Lonyah Small gave the vote of thanks.

It was a drastically different ball game on Wednesday morning, when the trainees were set upon by heavily armed and masked robbers who turned the place upside down, as all the trainees including their facilitators screamed and fell to the ground as they hid under the chairs.

One disgusted hospitality trainee, a young lady, looked the at the PEP photographer as he recorded the event using a still camera, and she screamed: “Mister we getting rob and you just taking pictures?”

For the cowering trainees, it later turned out that the ‘robbers’ were actually led by Inspector Adolph Adams, of the Anti Robbery Unit of the Royal St. Christopher and Nevis Police Force, accompanied by Constable Leroy James, Constable Ryan Haywood, and Constable James Hodge.

Inspector Adams explained that the Unit was set up on the 1st of December 2013 as an initiative from the Police Commissioner (Mr C.G. Walwyn) based on the fact that the country was experiencing a spate of robberies.

“The drill we did today is part of our job description,” noted Inspector Adams. “It is our task to go out in the communities, and sensitise the communities on ways they could prevent robberies and also to talk to the business community to alert them as to measures they could put in place to protect themselves, their business and their employees.”

He observed that a number of the trainees had been shaken badly but was happy that at the end of the session they left everybody smiling; the police were happy and the participants were happy as well.

“They were happy they learnt something because anybody could be robbed and we told them that a robbery is something that is planned over time and it happens with speed and precision,” observed Inspector Adams.

“At least they know what to expect and the message got over that it is better to lose some money or some valuables than to lose your life and we feel good that our message was well received.”

PEP’s Training Coordinator Mrs Celia Christopher, who was ominously mistaken for a trainee by the ‘robbers’ and ended up being pushed to the floor under the chairs, noted that the simulation exercises were important as they practically taught the trainees something that is in their training modules and more importantly how to cope in a real life situation.

“We have brought the police to work along with us because they are the experts in this area,” she explained. “We are partnering with some of these institutions to make sure that when we deliver the training that all of its aspects in the fields they have chosen have been covered.”