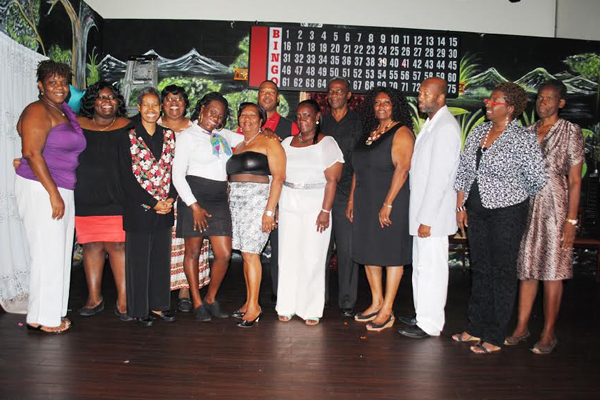 Basseterre, St. Kitts — The People Employment Programme (PEP), which was launched in December 2012 by Prime Minister the Rt Hon Dr Denzil Douglas, is a model programme that continues to receive commendations from local, regional and international organisations.

The observation was made by Mrs Celia Christopher, PEP’s Training Coordinator, last week Saturday December 13 to a section of current and former PEP facilitators who had gathered at Sweet Lime Restaurant for dinner to mark this year’s Christmas and Carnival season and year’s end.

“However, we could not have achieved the success that we did without the support of the government, trainees, facilitators and our partners and we should all be proud of our achievements,” said Mrs Christopher.

“This evening as we celebrate the end of another year of the PEP it gives us an opportunity to reflect on the many successes that we have made and the challenges that we face as a team. We must also remember we are a team and if any part falls, the entire team will fall.”

She reminded the facilitators that the People Employment Programme was designed to ensure that the youth in the Federation is equipped with the necessary knowledge and skills that will make them more marketable and employable, as well as to assist them with their personal development and to alleviate unemployment among the youth population.

“When I reflect on where we were and where we are today, as your coordinator I am very proud of you,” Mrs Christopher told the facilitators. “You have demonstrated your knowledge and skill in the various competencies that you have undertaken, which were not without their challenges.

“As facilitators you have played the role of teacher, counsellors, parent and friend and have exhibited love, patience and understanding for your trainees. You must consider yourselves lucky to have impacted so many lives and I want to thank you for those times when you have all gone over and beyond the call of duty to get the work done.”

Mrs Christopher observed that she considered herself lucky to have been given the opportunity to work with them and she implored them to always display good work ethic and not to be afraid of criticism, as by doing so it could only serve as a great motivator.

According to the PEP Training Coordinator, it was important that all working under the People Employment Programme learn to communicate with each other and advising that they could begin by learning to listen, commenting that it was one of the most powerful tools that they could use yet it did not cost them anything.

Mrs Christopher, in remarks made after the dinner, commended PEP participants working at Sweet Lime Restaurant for preparing the dinner. She was particularly impressed by PEP waitress Ms Jemoy Dasent who was the sole person waiting on the guests.

The waitress explained that before she joined PEP she had worked at the Frigate Bay Resort and therefore did not find it hard to be the only person waiting on the guests as she would have served large numbers before. She however observed that since joining PEP she would have learnt more.

“Since I joined PEP my experience has gotten much better,” said Ms Dasent. “I just love the job that I am doing. My dream from scratch was always to be a waitress and after Frigate Bay Resort closed I figured that I wouldn’t just give up I would further everything and PEP has really made it much better for me and I am thankful for that.”

Guest speaker at the function, which was chaired by PEP facilitator for Entrepreneurial Development Ms Dawn Mills, was Mr Joseph O’Flaherty Jr., President of the St. Kitts and Nevis Trades and Labour Union who updated them on new labour laws, including the Protection of Employment Act.

“Whatever problems you have in terms of labour, we have laws that you can research, you do not have to guess,” said Mr O’Flaherty. “The brightest instrument that we have in our arsenal is called the Protection of Employment Act. There is also another Act which is the Apprenticeship Act, which covers programmes like PEP.”

On the issue of severance pay he advised that if one was working for over a year, “we have a formula that clearly outlines how the calculation should be done. If you were there for a number of months, some amount of years, it clearly outlines what you should be paid.”