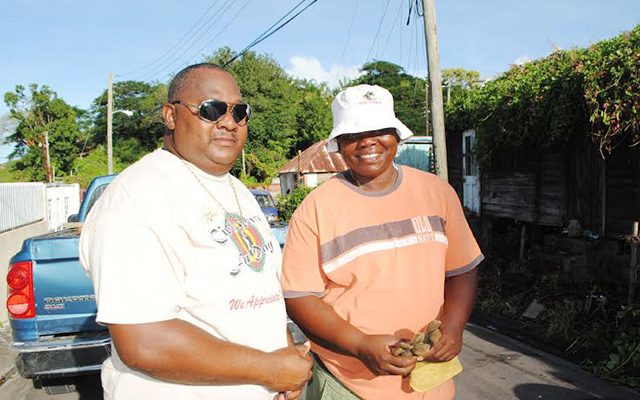 BASSETERRE, ST. KITTS — The People Employment Programme (PEP) is making a positive change in the town of Sandy Point. PEP Field Officer for the area, Mr Dwight Burke, is reporting that the benefits the people of Sandy Point are enjoying are as a result of the wise decision taken by the Prime Minister the Rt Hon Dr Denzil Douglas.

“We have workers whose mandate is to clear bushes growing around the town especially as it relates to a number of abandoned plots,” explained Mr Burke. “By the time we finish the job, we not only have an environmentally clean area as we eradicate breeding grounds for mosquitoes that spread chikungunya, but also add value to those abandoned properties.

“It does not end there. What we do also contributes to the safety of the people because as the Commissioner of Police (Mr Celvin G. Walwyn) has in the past warned, illegal weapons and drugs are usually hidden in such abandoned and overgrown properties, but when we cut down the bushes and clean up the area, such a thing cannot happen.”

Mr Burke made the remarks last week at the Ghaut in Sandy Point, where a group of PEP workers, under the supervision of Ms Joycelyn Richardson had just finished clearing the ghaut after which the village is named, and had embarked on clearing two abandoned plots.

As the group, which is named the Ghaut Clean-up Crew, was doing the work, two elderly women stopped by and on seeing the work that had been done on the ghaut, one of them said: “Thank you all, God bless you. I will not be afraid to come out at night anymore.”

According to the PEP Field Officer, it was agreed that their work would be more effective if each village had its own small but manageable crew, instead of having one large group that moves from village to village. His area of oversight covers Challenger’s to St. Paul’s.

“We formed them together and this is one of the groups, which we call the Ghaut Clean-up Crew,” explained Mr Burke. “These workers what we decided was that they will be cleaning the ghaut area, the hillside which are full of high trees, as people are crying for safety when they want to walk, especially taking the morning walks, which they were not able to do.”

The group targets all open areas for cleaning as the bushes are growing very fast due to the current rains, and also all abandoned plots where the bushes grow so high that they even cover the buildings, but where the owners of such properties are not willing to come forward to do the cleaning, leaving the otherwise beautiful homes to deteriorate.

“So everywhere there is an abandoned place we realised that it is clustered for a while and the owner is not coming forward, I get the crew come and clean it,” said Mr Burke. “And there are times now that when they clean it, the owners for them show up after. For years they would be like this, but as soon as it is cleaned up, then you see the owner.

“We are also adding value to these abandoned homes. That is another part of it, as you can see these homes were not able to be seen because of the bushes growing around them, but with what we are doing, anyone can come and take a good look of them and appreciate them. The PEP workers are very proud of what they are doing, and I must say straight up that PEP is one of the most wonderful thing the Prime Minister could have ever put in place.”

Supervisor of the Ghaut Clean-up Crew Ms Joycelyn Richardson is a likeable and friendly person, but one who takes a no-nonsense approach when it comes to doing what they are mandated to do. She used to work as a security personnel at the Air and Sea Ports Authority from where she acquired those attributes of job discipline.

The group is made up of herself and seven other workers and according to her, it was put together in February this year and since then they work hard, coming very early to work before the hot sun starts sapping up their energies, and explained that is the reason they go home earlier than the other workers.

“This group is all about getting together and get the place all clean up, wonderful job, doing what I am doing and doing the best of what we can, so the environment could be beautiful, and people could have a good look at the place and see we are doing a wonderful job,” explained Ms Richardson.

“When you have someone working with me and I would like someone to come to show that they come to work. I do not want nobody to be here and slacking and making jokes. When you come to work, you have to work with me. So if you come and you a’int showing improvement for me, you have to ask the boss to give you a transfer, because when I come to work I am on the public duty.”

Ms Richardson explained that while the group primarily deals with Sandy Point, there are times when their services would be needed in Newton Ground, and they always do the needful. She noted that the public appreciates what the group is doing and it is never shy of telling them that they are doing a good job.

She said that PEP has been of great assistance to those workers who are now able to bring food to the table at home, and also pay bills while contributing to the economic growth of the country, because previously they used to be around in the villages doing nothing of value. She said that the experience they have gained has shaped them to be responsible persons.