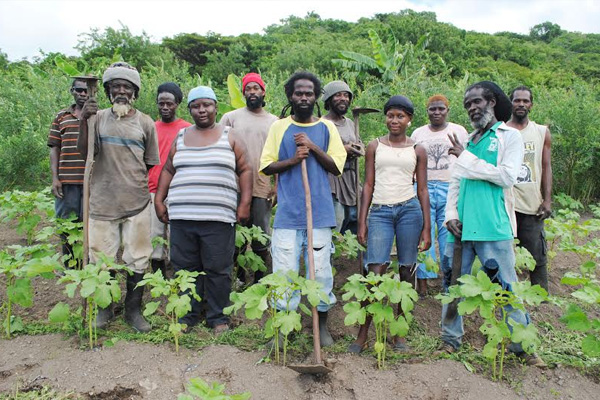 Basseterre, St. Kitts — A Rasta group that recognises the role God played when He put Adam and Eve in a garden, and one that strictly follows that model to increase food security in the country is attributing its recent success in organic farming to the People Employment Programme (PEP).

Members of the Gideon Force Organic Co-operative Society in Old Road have for the last nearly over five years been struggling to produce food crops the way it would have been done by Adam and Eve, without chemicals. This had been an uphill task until when they made a partnership with the PEP.

“Members went through problems but the PEP being there, it is a plus for us now,” said Mr T-Sean ‘Ras Bora’ Flemming, Farm Manager and Treasurer of the co-operative society. “We give thanks to the government for this progress that we have made as we endeavour to boost food security.

“We must give exaltations where necessary and this being the case we must exalt and sometimes we criticise. But as it relates to the People Employment Programme, we are giving exaltations to the government. I give thanks for the PEP and I hope PEP stays as long as it could stay.”

The Gideon Force group was first started as a Rasta Church group, and according to Ras Bora, their initial aim was to produce food not only for individual members and their families, but also to supply the entire country and even export to the region. They were however guided by Biblical attributes where no chemicals are used.

The group, which has four and a half acres leased from the government, graduated to be a co-operative society when its membership reached fifteen as required by the law. However, while members worked on a voluntary basis, not all showed up even though they remain active members because they are update in their subscription.

“Following the launch of the People Employment Programme, one of our members contacted a government official and that is how the PEP came around,” explained Ras Bora. “So when people heard that we were employing through the PEP,they would come to look for a job. We would take the names and go through the procedures and then we get assistance from there.”

Currently there are 14 PEP workers at the Gideon Force Organic Co-operative Society farm, who according to manager Ras Bora, who is assisted by Mr Clifton ‘Irie-I’ Sweeny, Assistant Farm Manager and Vice President of the co-operative, are doing a marvellous job in terms of maintenance and production at the farm.

“Maintenance wise they have been maintaining especially the fruit trees, because most of the land is covered with fruit trees,” noted Ras Bora. “In production wise, they help in production because for the amount of food we need to reach a maximum production to make proper profits.

“When you are doing organic farming where you do not use no chemicals to keep off insects you are using your handto work on the plants, it is very important to have labour and that is what the PEP did for us. They give us labour to keep the whole environment clean most of the times because this is not easy to do with two or three persons.

“We tried before and were not doing much progress, but since the PEP came, this is what is happening now. The tidiness of the place came around from during the PEP. PEP people have been running it for a year and a few months, so I give thanks.”

According to the Farm Manager, PEP workers are benefitting because they get a share of the food they grow, and it is his hope that when the society stabilises financially now that they just bought pipes for irrigation, the society would consider paying part of their salary. He is hoping that the government could assist them further, saying there is still room for improvement.

PEP worker Ms Vanessa Murray, from Old Road, joined PEP June last year. She explained that she chose to do farming because she is from a farming background. Since she joined PEP, she has learnt new ways of farming and is now better equipped to even work on her own.

“I would like to say thanks for PEP, it has helped me a lot and I hope it can go on for longer more time,” said Ms Murray. “I will be able to grow more food for people to eat, because we should not import foods instead we should sell to other countries as St. Kitts has very fertile soils.I am proud of what I am doing as it is my way of building the nation and all this is because of PEP.”

Mr Eugene Ezekiel Davis aka Charles also from Old Road praised PEP saying that it is empowering young people. With the knowledge that he has gained, he said that he is ready to graduate from being paid a weekly salary to a level where if given a loan he would buy his own equipment and stand on his own.

“We had started it the way you see it but when PEP came around it was a means of the young people to transform themselves into something else,” said Mr Davis. “So PEP came and it gave us a sponsorship which is helping to empower us. This way we will be able to buy our own tools and could at the end of it stand on our own.

“Some people do not see the double advantage because when you come here you learn more about farming and you also earn a salary and you could cultivate a piece of the land on your own and empower yourself.”