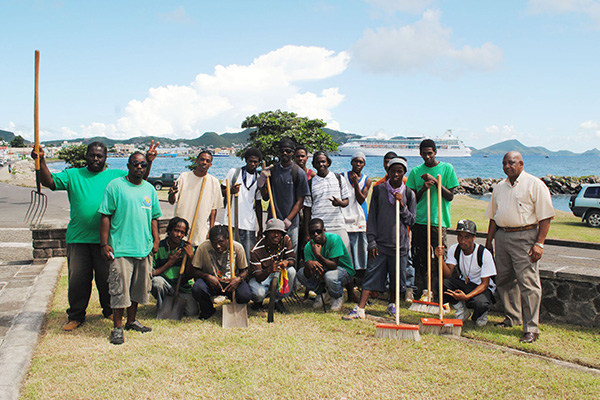 The Coordinator of the Parks and Beaches Unit of the Ministry of Health and Environment, Mr Daniel Henry knew that his unit was a contender for one of the awards but did not know which one or at what position. However, at the end of the ceremony his unit walked away with the Environmental Excellence Award.

“This year, the Parks and Beaches Unit was awarded for the Environmental Excellence Award, given the work that we have done over the past year,” said Mr Henry in an interview held in his office.

“Given the fact that the Parks and Beaches Unit is committed to the environmental enhancement and beautification of the entire St. Kitts, that then gives us a more impetus to achieve that award and given that not only public areas, but sometimes we get involved in doing cleaning of a number of institutions in St. Kitts as well.”

Even though the unit has a dedicated workforce that would have propelled it to win the same award in 2011, and place second last year, Mr Henry is a firm believer that when Jack deserves his jacket, that it must be given to him.

Apart from his regular staff, Mr Henry has a large contingent of People Employment Programme (PEP) workers assigned to the Parks and Beaches Unit.

“Because the People Employment Programme has been in existence now for eleven months and some of those PEP workers are assigned to Parks and Beaches Unit, I must say that they contributed very much in Parks and Beaches’ achieving this award,” admitted Mr Henry.

“I must thank them, those workers from PEP for being a part of Parks and Beaches Unit to allowing us to achieve this award.”

That St. Kitts was earlier this year ranked in the fourth place among the 16 Best Islands in the world, the Parks and Beaches Unit Coordinator is of the opinion that his team of workers and those from the People Employment Programme contributed immensely for the island to win that international accolade.

“The Parks and Beaches Unit contributed significantly in that effort, as it has become a very critical partner to the Ministry of Tourism and the Tourism Authority given the fact that there are a number of tourism areas and sites we are responsible for maintaining,” said Mr Henry.

“We are looking at the Independence Square, War Memorial, Black Rocks, among others, and so basically we are significantly playing a critical role to the St. Kitts Tourism Authority.”

In reference to the national monuments, Mr Henry said that there is a group of the People Employment Programme workers under a Parks and Beaches Unit supervisor, Mr Damian Maynard, who have done an excellent job in keeping the War Memorial in Basseterre spotless.

That group is called the Central Basseterre Group of the People’s Employment Programme that concentrates its efforts and takes responsibility in cleaning the areas pertaining to Central Basseterre as far as Shadwell area. It consists of about 26 PEP workers.

“They have been doing a fairy good job for which I must commend them and I am very satisfied with their work performance,” said Mr Henry. “As a result of my confidence and my trust in them and even considering the work performance, I engaged them recently to clean around the War Memorial and its immediate surroundings.

“This was to facilitate the Remembrance Day service on Sunday November the 10th and having done that, I commend them highly for the work that they did in that area, so that the service that was held people were very pleased to see how beautiful and clean the surroundings were.”

“Most of the credit, I was told would have gone towards the involvement of PEP participants in that area, and indeed, it is a privilege and honour for those persons to have been in a position where they can beautify the country because it is not just about cutting grass, it is about ensuring that the country’s landscape is of such that it continues to attract tourists,” said Mr Hanley.

Mr Hanley strongly believes that St. Kitts will continue to shine, having been ranked the fourth among the 16 best islands in the world, because people in the Federation have also become conscious of the role they play in keeping their surroundings clean, which has led to a great reduction of mosquito-borne diseases.