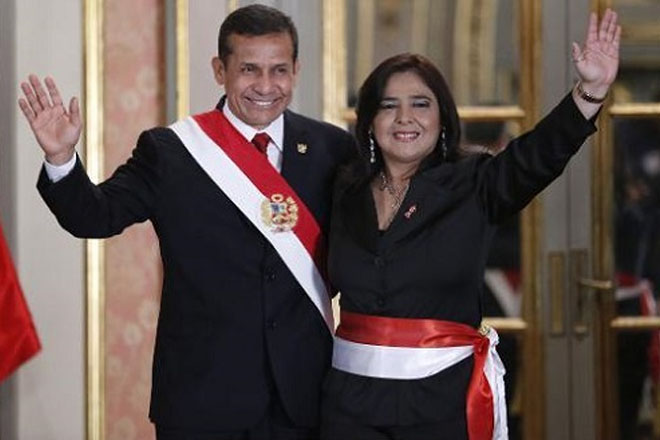 Jara was deposed in a no-confidence vote late Monday after media reports that the powerful National Intelligence Directorate, or DINI, spied on politicians, journalists, business leaders, and thousands of everyday citizens.

The prime minister had been under fire since March 19, when news magazine Correo Semanal published a sweeping list of Peruvians who had allegedly been targeted by the now-suspended intelligence agency.

Summoned to Congress, Jara, 46, said the spying dated back to at least the previous two governments, and told lawmakers she had ordered an investigation.

But Opposition parties attacked her for failing to end the practice, and succeeded in getting the votes needed to remove her from office – 72 to 42, with two abstentions.

The move automatically dissolves the government, though the president can reappoint ministers to their posts if he chooses once he finds a new premier.

With one year to go in his term, Humala now faces his worst crisis since taking office in 2011.

The centre-left president has 72 hours to find his seventh prime minister in four years.

Humala broke his silence to pay tribute to Jara, thanking her for her work and deploring her “unfair” sacking.

“She was one of the best, if not the best … we ever had,” the president said during a visit to the city of Chosica devastated by mudslides.

“I regret this happened but we must respect the decision, because it’s part of the democratic game,” he said, vowing to have a replacement “soon”.

Humala must get his new nominee approved by a Congress in which he does not have a majority.

If his choice is rejected, he can dissolve Congress and call legislative elections.

Humala had previously shaken up his Cabinet several times to fend off various crises, including in February, after the Government temporarily shut down the DINI in a vain effort to head off the scandal.

But this is the first time Congress has deposed one of his Cabinet leaders.

It was the first such vote since 1963, and only the third in the past century.

Peru’s powerful first lady, Nadine Heredia, the leader of the ruling Nationalist Party, called the sacking a pretext to attack the Government ahead of general elections next year, in which she is touted as a likely candidate to succeed her husband.

“It’s a deplorable display of political blackmail and electoral profiteering without thinking about the consequences for the country,” she wrote on Twitter.

Jara, who had been in her post since July 2014, remained defiant.

“I thank Jesus for giving me the opportunity to serve the country in the executive branch,” she tweeted.

“It is an honour to be censured by Congress.”

Ruling party lawmakers rallied around her.

The spying went back to at least 2005 “and nothing was done”, lawmaker Victor Isla said during the congressional debate.

“Now, someone who wants to do something (investigate) is censured,” he said.

Humala’s approval rating has fallen to 22 per cent amid a series of crises, including a money-laundering investigation targeting his wife and Toledo, and mounting protests by indigenous Peruvians opposed to mining and oil activities on their lands.

Peru, the world’s fifth-largest gold producer, registered its slowest economic growth in five years in 2014 – 2.35 per cent – largely because of a sluggish mining sector.