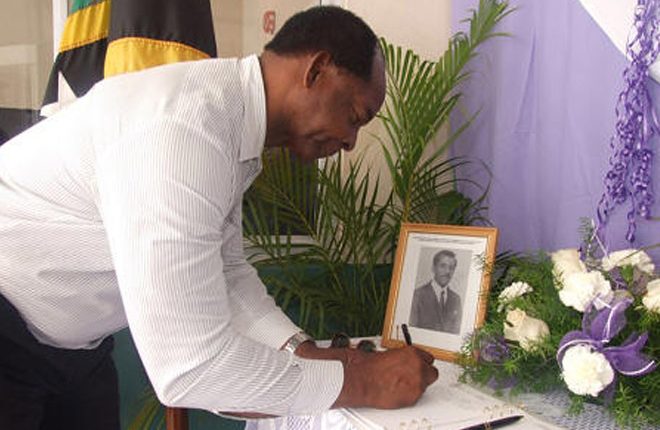 (January 23rd, 2018) — Prime Minister Dr. the Honourable Timothy Harris extends his heartfelt condolences, and those of the Government and people of St. Kitts and Nevis, to the family and loved ones of Mr. Reginald James.

Mr. James, a well-known lawyer and former Crown Counsel and Magistrate, who served as a member of the Public and Police Service Commission, died Sunday, January 21st, 2018. He was 77 years old.

“Reg was an accomplished and versatile professional who inspired admiration, respect and trust among family, friends, colleagues, church and community members alike,” Prime Minister Harris said yesterday, Monday, January 22nd, 2018, about Mr. Reginald James, who also served as an accredited lay preacher in the Methodist Church St. Kitts Circuit for the past 30 years.

Reflecting on the life of Mr. James, the Prime Minister of St. Kitts and Nevis added, “His gravitas, sound judgment and knowledge of the law made him a natural fit for the Public and Police Service Commission, to which he made worthy contributions since his appointment on September 1st, 2016, bringing to bear his skills and experience honed in his early years as a police constable. Reg served with distinction in the Leeward Islands Police Force here in St. Kitts and in Anguilla, as well as in the police force in Tortola, BVI.”

The Honourable Prime Minister went on to note that, “Throughout his distinguished and high-profile career, which kept him very busy and fulfilled, Reg still made time to serve the church and community and develop enduring friendships with people of diverse ages and backgrounds. These friends include members of the Cayon Methodist Church, where his mother, Martha, was a class leader and the care fund steward, and he was actively involved in fellowship since his youth.”

Prime Minister Harris added, “In these friendships, he revealed a lighter side of himself such as his fondness for Charles Wesley’s hymns, his skill in playing the harmonica, as well as his love for cooking and gardening, and that he was even a first-class tailor.”

The Honourable Prime Minister’s thoughts and prayers are with the family and loved ones of Mr. Reginald James as they grieve his sudden passing. May they be comforted with the words of his favourite scripture, Philippians 4:13, “I can do all things through Christ who strengthens me.”