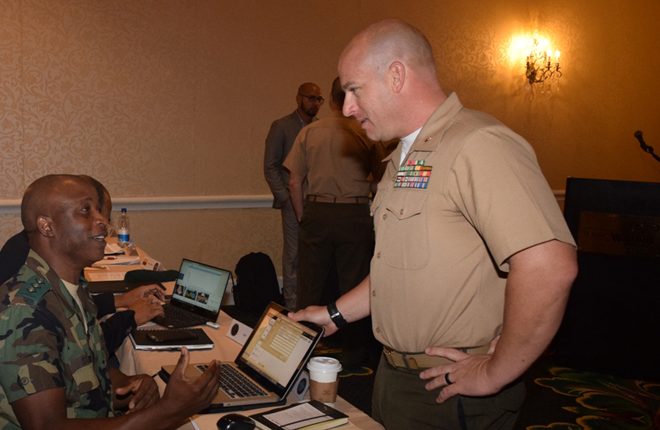 (SKNIS): As Exercise Tradewinds 2018 nears, with St. Kitts-Nevis hosting phase one from June 4-12, Lieutenant Colonel (Lt. Col.) Thomas Grace, United States Marine Corps and Exercise Branch Chief at US Southern Command stationed in Miami, said that it is expected for security forces to be prepared for execution during phase two to be held in Bahamas from June 13-21.

“Coming out of phase one, the expectations from the exercise plans that I lead are that the forces that have built up their training to this point in the exercise are ready to transition from St. Kitts and move into the Bahamas and pick up operations in the Bahamas,” said Lt. Col. Grace.

He noted that the exercise done in St. Kitts-Nevis is the initial training, preparing, and correcting of any deficiencies some of the units may have before moving to support the national exercise in Bahamas.

“Phase one is the evaluation piece. Tradewinds has evolved from a point where we’ve integrated a phase zero. So that phase zero training is really incumbent upon the independent nations to work with their troupes and build that basic level of proficiency,” he said. “We come into phase one with everyone on some level where we can make the minor corrections, fix these small deficiencies and then give it a quick test run or practice if you will before actually moving into the execution in phase two.”

Lt. Col Grace echoed his pleasure with the local planning committee, noting that he is quite satisfied as measures have been adequately put in place to ensure that the event is successful. He noted that it is “understandable that there can’t be 100 percent commitment” from partnering nations in the Caribbean based on the many high level events at present that take precedence over planning for something of this nature. He said that the level of effort and dedication from all the countries in the region has been superb.

The exercise branch chief said that it is a great step forward for St. Kitts-Nevis to once again host Exercise Tradewinds, as the federation will be able to brush up on any weak areas that may arise.

“There is going to be holes and we are going to find things that are wrong but that is why we do the exercise. It is best that we do these things now and we have learned from the mistakes we have made in an exercise before it happens in the real world,” he said, while referencing Exercise Tradewinds 2017. “I think the perfect example was last year during the hurricanes when we worked with Barbados and Trinidad and Tobago. The exercise had some hiccups; there were some things that went wrong in planning but we identified them there, and when Hurricanes Irma and Maria rolled through the region, we were able to respond as a united front.”

He added that all of the “contributing troupe countries were able to work through issues” that were identified “during the exercise and actually execute them when it came time in the real world to do it”. This he noted was of extreme importance as they were able to help countries that were ravaged by the storms.