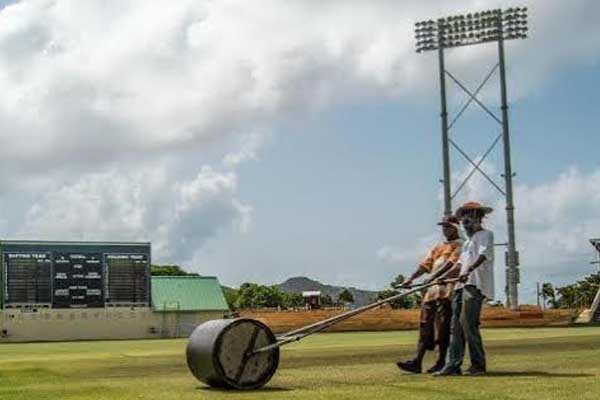 Pitching the Right Conditions for CPL

Basseterre, St. Kitts (SKNIS) — The science behind preparing a pitch is on full display at the Warner Park Cricket Stadium as groundsmen work tirelessly to get the right balance between “carry and bounce” to produce exciting Twenty20 matches.

Head groundsman Stedroy Douglas, is using his 21 years of experience in guiding the preparations for the debut of the Limacol Caribbean Premier League (CPL) T20 in St. Kitts and Nevis on August 07. He spoke a bit about the process.

“We are going to shave the grass,” he said. “We are rolling (using a heavy roller on the pitch) enough grass that would keep the surface together. …When that is done, what we are going to have is a pitch that is grey or dark brown in colour. … That is when we will be able to say we have a good pitch.”

This method is expected to produce suitable conditions that allow for an exciting matchup between batsman and bowler. The CPL matches on August 07, 09 and 10 are doubleheaders meaning that two games will be played on the same pitch with about an hour between the end of the first and the start of the second. This means that the pitch must hold up for 80 overs and remain lively.

“Yes we are going to be ready, we don’t have any doubts about that,” Douglas emphasized confidently. “We are accustomed to preparing pitches so we are on the ball with that.”

Warner Park is renowned for having a batsman-friendly pitch for limited overs encounters. Factor in an intimate stadium setting, a lively crowd and an upgraded facility and you have what many expect to be a recipe for success for the closing games including the semifinals and finals of the 2014 Limacol Caribbean Premier League T20 tournament.