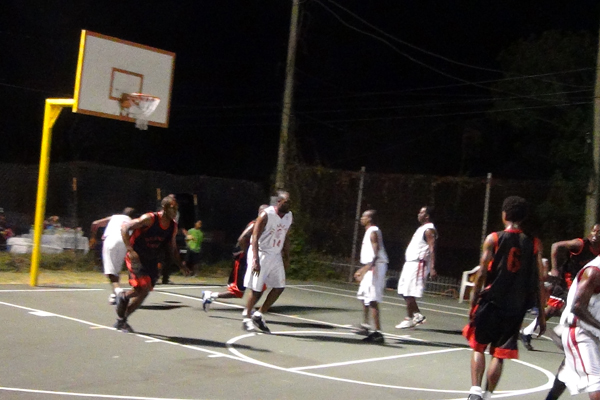 (Sports Page) The Malcolm Guishard Basketball League opened the evening of Saturday 5th October at the Church Ground Hard Court. There was a brief opening ceremony with the opening prayer done by Miss Wanda Parry and the National Anthem sung by all present.

Miss Parry, who is the President of the Nevis Basketball Association, welcomed everyone present.

Mr Kenroy Tobias, President of St.Kitts Nevis Amateur Basketball Association then addressed the players. He expressed disappointment at the lack of proper response by some players to the singing of the national anthem and admonished them to improve in that area.

Mr Keith Glasgow, Permanent Secretary in the Ministry of Sports gave words of encouragement to the players. He reminded them that apart from being a good avenue for exercise and fitness, Sports in general was ‘big business’ and could be used to improve the lives of the players, their family members and their island.. He also commended the Hon Mark Brantley on his continued sponsorship of the league He then proceeded to declare the league open.

The Vote of Thanks was done by Miss Parry and then the crowd was treated to an exhibition game between host C G Massives and Quakers out of St.Kitts.

The exhibition game was set out in two 15 minutes halves and ended in a close and exciting finish: Quakers 32 to Massive 27
First half C G Massive 15 to Quakers 14
Second half Quakers 18 to C G Massive 12
Quakers winning by 5 points

A series of knock out games between the participating teams ensued

PJ’s winning the Knock Out Champion for Malcolm Guishard League 2013.

Upcoming games in the league: