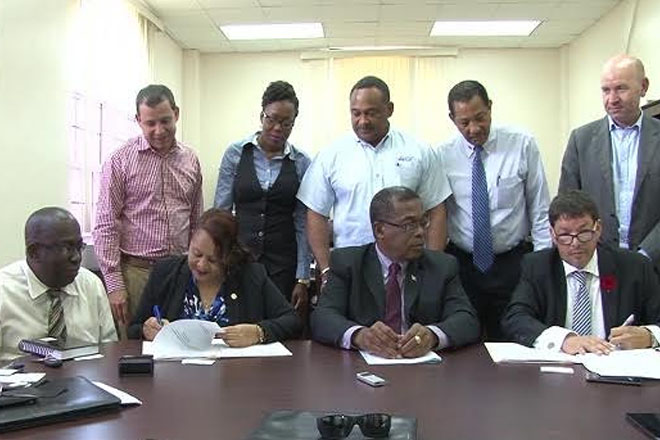 (ZIZ News) — The Government’s work to strengthen its foreign policy, which includes repairing the relationship with the Government of Canada, could be getting another boost.

This week, Acting Permanent Secretary in the Ministry of Public Infrastructure, Brenda Boncamper signed a Memorandum of Understanding [MOU] with Canadian Commercial Corporation (CCC) as the next step in constructing a cruise pier here.

While the cruise ship pier is not being built by the Government of Canada, developer Canadian Commercial Corporation [CCC] has the support of the Canadian government in its projects, this being one.

While speaking to the media, Minister Liburd said the partnership provides hope that the relationship between St. Kitts and Nevis and Canada will be strengthened.

Luc Allary is the Director of Business Development and Sales in the Caribbean and Latin America for CCC. He described his company’s work as “very fast track”.

“Our role is to facilitate and accelerate contracts abroad for governments who have priority projects that they want to put in place, using what we have in terms of capacity in Canada, knowledge and putting that in terms of a blended offer along with a financial package that we would work with our sister crown corporation or a commercial bank or some other form of funding that we can gather in order to fulfil these requirements,” he said.

Allary made it clear that the MOU also allows for other projects to be developed.

“The MOU is not a project specific MOU. It’s made to cover a multitude of infrastructure related projects that’s meant to fall under the portfolio of the minister so yes, there is room to do other projects and it’s written in the sense that we agree mutually to undertake a specific project and it becomes an annex to the MOU so there is a tool there that we can move quickly and discuss other projects and of course, we are more than willing to look at other projects,” he said.

When constructed, the second cruise pier at Port Zante will be able to accommodate two mega cruise ships to meet the demands of the growing tourism market.