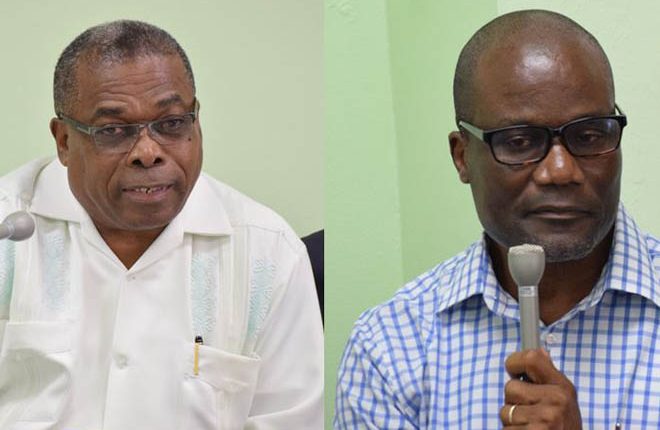 (SKNIS): During a press conference held on July 20 at Government Headquarters, Minister with responsibility for Public Infrastructure, Honourable Ian Liburd, stated that Basseterre High School (BHS), will be located downstream the Basseterre Aquifer. However, plans are being discussed to move the wells further upstream.

Minister Liburd explained that the Basseterre watershed spans over 5000 acres of land, which starts from the Ottley’s mountains in the west to the Canada hills in the northeast to the Conaree hills in the east.

“Where the school is going to be located is referred to as the downstream, that is, the wellfield, but the water comes from all the way up from the watershed and it percolates underground though our high porous soil. When it is saturated, it flows into the sea water,” said the minister.

He said that the habitation and management of the Basseterre Valley have a protection measure for the underlying aquifer, thanks to Ocean Earth Technologies.

“There are two volumes. One is what we refer to as the Water Resource Management Plan. In that plan, the recommendation was to move the wells up to the upper watershed to a higher level because of the salt intrusion. It’s a floating aquifer with fresh water, floating on seawater,” said the minister.

It was said that the greatest threat to the water at the moment is saltwater intrusion. This is why water rationing is currently taking place.

“This is so because we have been pumping from that wellfield at a particular level, 24/7, for over 30 years,” the minister explained. “So, what has led to the rationing was the threat of the salt intrusion. As a matter of fact, we have put before the Cabinet that it is time we really look at moving those wells upstream. We have also engaged Ocean Earth Technologies to do the phase two of that particular project whereby they have already done sub studies whether to look at some test wells and test drilling.”

The issue will be “nonexistent” once the wells are moved further upstream, said Minister Liburd.

“So, I think we have to put that in focus and as we go along with discussions about the siting of this school and as the representative of this constituency, I can say to my constituents that they should feel assured they are being considered and that they will be highly protected,” he said.

According to Water Engineer, Denison Paul, a Tertiary Water Treatment plant will be put in place to further mitigate the slim chance of contamination of the water by the school. It will be the only one of its kind in St. Kitts.

The plant will essentially move everything out of the water, which cannot be seen. That water would be of a much higher quality than the water presently discharged into the ocean.