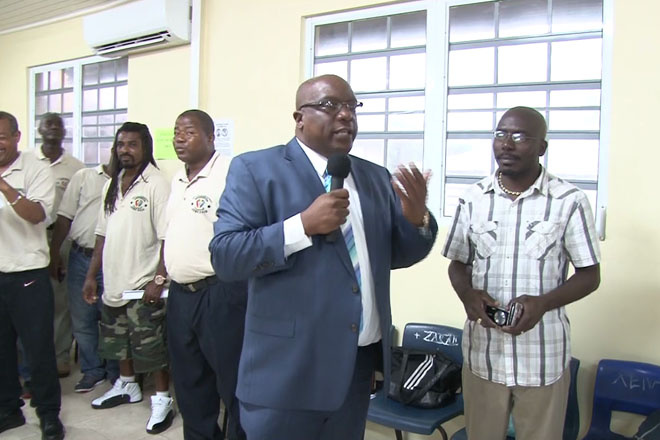 Basseterre, St. Kitts (SKNIS) — Prime Minister Dr. the Hon. Timothy Harris recently called on students and residents of Cayon to report any criminal activity in an effort to make the area even safer for all.

At a recent ceremony to hand over a Public Address (PA) System from the class of 1982, the Prime Minister took the opportunity to encourage the young people, especially those who reside in Cayon, to take charge of their community.

Dr. Harris added that Cayon should not be a haven for criminals, noting that when criminals are safe, the pressure turns on the law abiding people in communities and it should not be that way. He made a very special appeal and stressed that there must be zero tolerance for crime and disorder in all communities.

The Prime Minister also stated that the government will give the necessary support to law enforcement.

“I pledge that we will give all the resources that we reasonably can to the police to the defence force, to the coast guard, to all agencies of law and order to ensure that we stamp out crime,” he said. “The country will not progress in an atmosphere of lawlessness and disorder and therefore I see it as the single most important duty of the government to preserve the peace at all costs.”

Dr. Harris thanked all the students of Cayon High who appreciate the country and want to see it prosper. He stated that when such students graduate they should be able to find jobs in a variety of areas thus providing opportunities for them to move from one community to the other without hindrance and encouraged them to join the police in the fight to eradicate crime.