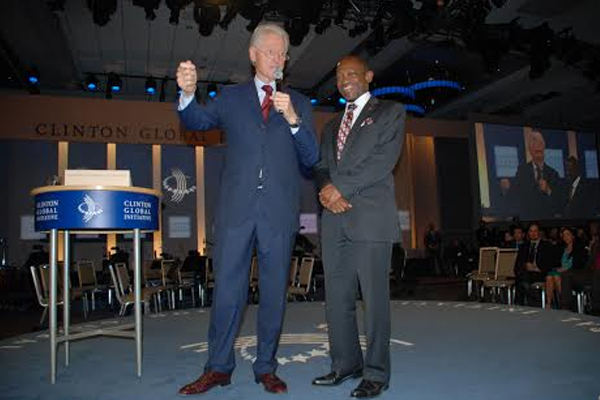 Dr. Douglas, responding to a question during his weekly radio programme “Ask the Prime Minister,” a day after he and his energy minister, the Hon, Dr. Earl Asim Martin, held talks with representatives of the Clinton Foundation Climate Initiative said the Foundation is providing technical support and will be working with the government of St. Kitts and Nevis and with the Department of electricity and energy in particular to bringing the cost of electricity down.

He said the continuing high price of electricity is not sustainable.

“It means it cannot continue forever, it is going to create serious problems for us. We therefore have decided to use other forms of energy as I said in the opening statement, we have wind, we have solar – the sun and we have geothermal which is embodied within the body of the earth and so we are finding ways of using those energy sources to generate electricity and thus bring our dependence on diesel down and thus the cost of electricity down,” he further explained.

The Clinton Foundation representatives informed Prime Minister Douglas that having worked with him on the successful HIV/AIDS Initiative and his commitment, dedication and perseverance in dealing with HIV/AIDS; they want to work with him on the renewable energy situation in St. Kitts and Nevis.

They are going to be looking at the prospects for Wind energy that we have been working on for some time with the North Star Company. They are going to look at how we dispose of our waste and maybe how we might be able to work closely on a new project to convert waste into energy or electricity and then they would allow us with their support to find the necessary investors who will be joining with the government in joint ventures,” said Prime Minister Douglas.

He said the Clinton Group will also provide technical support to the Nevis Island Administration with regards to the geothermal energy project on that island that has been ongoing for several years, but which seems to have been stalled.

“They will also look at the potential of the island of St. Kitts to also generate geothermal energy and thus revolutionize our dependence on fossil fuel energy in St. Kitts and Nevis and bring us into a new realm, where they will be green energy, cheaper energy, sustainable energy and this will impact on the cost of generating electricity and the consumers then, will pay less for their electricity use,” Dr. Douglas told listeners.

“This is a very important initiative that is being aggressively pursued by the Clinton Foundation, because when the people before they arrived, the message I received from the Foundation is that the President has worked with you in the past successfully, he knows you can do it, you have the leadership so let us work together again to impact upon the energy challenge that you are facing here in St. Kitts and Nevis,” said Prime Minister Douglas, adding:

“We expect the Clinton foundation will work with us to impact positively on the lives of the people of St. Kitts and Nevis by bringing cheaper energy sources and thus cheaper electricity for the consumers of St. Kitts and Nevis, of course it is going to mean upfront investment, but nevertheless at the end of it, it is going to lead to cheaper electricity costs for our people.”