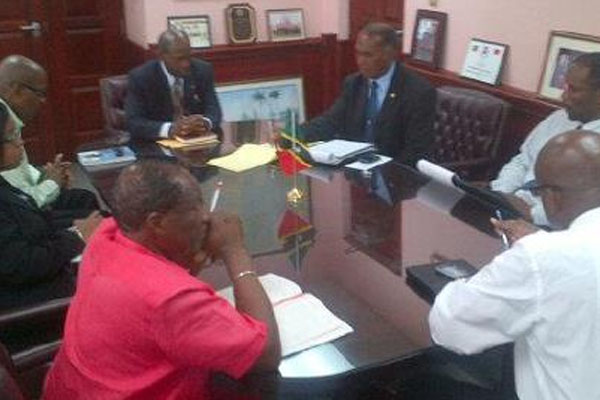 Basseterre, St. Kitts (CUOPM) – A call for collaboration and consultation and not confrontation, between the Federal Government of St. Kitts and Nevis in Basseterre and the Nevis Island Administration (NIA) in Charlestown.

“I really want to call upon the NIA government. I want to make this public call today to them on this programme. I call upon the NIA Government (of Premier the Hon. Vance W. Amory) to sit with me and let us begin a period of consultation. How can we together move this Federation forward?,” said Prime Minister Douglas during Tuesday’s “Ask the Prime Minister.”

Dr. Douglas’ remark was prompted by a telephone call to the programme by Rodney Elliott, a prominent supporter of the Concerned Citizens Movement (CCM), who urged the CCM Deputy Political Leader and the Deputy Premier of Nevis, the Hon. Mark Brantley, “to get up off of his high horse now and catch the boat and go to St. Kitts, sit down in a meeting with Unity and tell them that he is done with them and that they should stop with their stupidity and move out from between them because if he cannot see that the whole Federation is going down, when he join up with them to do all of these nonsense.”

“Mark Brantley, this is my call to you. Come out from between them. Mr. Amory (Premier) is not studying with it (Unity). It is you alone trying to force in it. Please keep out from between them. If you come out, St. Kitts and Nevis will come a long way better. Mark, come out, because Timothy (Harris) will run Unity straight down to the ground if he has to,” said Ms. Elliott.

He said the Federation will move forward with the Federal Government and the Nevis Island Administration sitting together to discuss issues “because the confrontation, the burning and the destruction will not get us anywhere.”