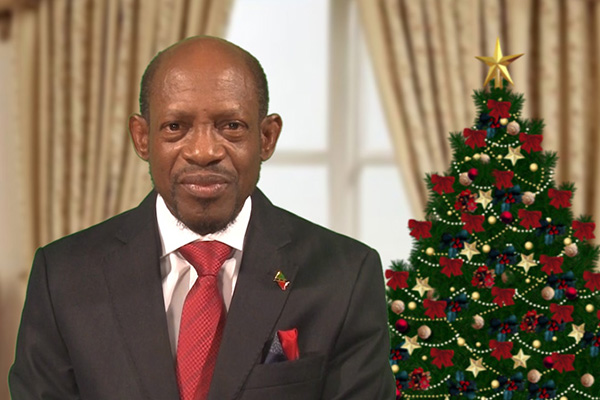 PM Douglas’ Christmas prayer is for hearts filled with the blessedness of Peace, the elixir of Hope and the transformative gift of Love

Basseterre, St. Kitts, (CUOPM) – St. Kitts and Nevis’ Prime Minister the Right Hon. Dr. Denzil L. Douglas told the people of the twin-island Federation they enter the Christmas Season with a great deal for which to be grateful.

“We were, this year, spared the wrath of natural disasters – something that the people of the Philippines, Australia, the United States and so many other countries are, unfortunately, unable to say today. The tumult, chaos, and blood-shed that have so traumatized the people of Tunisia, Egypt, Ukraine and elsewhere have, thankfully, stayed far from our shores,” said Prime Minister Douglas in a nation-wide radio and television address.

Prime Minister, Dr. Douglas pointed out that the  socio-economic collapse and anguish that have pummelled nations large and small, from the Caribbean region to the most distant of lands, have mercifully spared St. Kitts and Nevis.

“We do, as I have said, have a great deal for which to be thankful. And it is with these feelings of gratitude, that I wish for us all, on this Christmas morn, the blessings of a peaceful holiday season. And I wish this for us because peace is the most precious gift of all. That is why the Christ Child, whose birth so awed the shepherds, and had for so long been sought by the Wise Men; whose coming was heralded by the stars and is now celebrated the world over, became known, the world over, as the Prince of Peace. So, again, then, I wish us peace,” Dr. Douglas said.

He also gave thanks, that throughout the millennia, “this sacred day has always brought to the fore the best that is within us: a genuine desire to show love and kindness; a longing to reach out to persons we may not have seen, or even spoken to, all year – both at home or abroad.  For this is the beauty of Christmas.”

He noted that the Christ Child, as is known, grew into a most wise and noble teacher, impressing upon all the power of compassion, the magic of faith, and the importance of love.

“And this, we have come to realize, is the path to peace. During this Christmas season, and for as long as we may live, may these lessons be evident in how we live our lives. And may they forever shape and strengthen the society within which we live. Born in Bethlehem with neither powerful friends nor glorious robes, and reared in Nazareth, a town from which it was said no good could come, the teachings of Christ now lift and strengthen hundreds of millions of hearts and souls across the length and breadth of the world,” the Prime Minister told nationals and visitors.

Indeed, he stated, the teachings of Christ have served Kittitians and Nevisians at home, very well this year – a year which was, in so many ways, very different from any other.

“But did Proverbs not remind us to trust in the LORD with all our heart; and to lean not unto our own understanding?  And just as individuals, families, and entire communities across the millennia have gained strength and wisdom from God’s word, so too have we here in St. Kitts and Nevis, having been promised that if we wait for the Lord, He shall renew our strength.  That we shall mount up with wings like eagles.  Run and not be weary.  Walk, and not faint.  This Christmas and always, therefore, let us, as a people and a nation, wait on the Lord,” said Dr. Douglas.

He added that as a Government, nationals and residents, not only celebrate the birth of Christ, but give thanks for, and are guided by his teachings as well.

“In the parable of the talents, for example, He urges us to use and develop those gifts with which we have been blessed, and this we do.  And in Matthew he warns of mankind’s responsibilities to the hungry, the naked, and the lonely – not only at Christmas time, but the whole year through.  And this, too, is at the core of all that we do on behalf of the Nation,” said Dr. Douglas.

St. Kitts and Nevis he stated has been turning, ever more resolutely, to the potential of the earth, its seas, and skies to meet the country’s needs.

“And in doing so, we pay homage to what Genesis calls ‘the lights in the heavens that separate day from night.’  And we note Luke’s reminder that ‘He commands the winds.’ In nature, indeed, we see the gifts and the power of God,” Dr. Douglas noted.

He called on nationals and residents in this season set aside to honour the birth of Christ, “to see the gifts and power of God in each other as well.”

“May we remember, in the midst of our blessings, to pass on to others some of any joy that may now be our own. And in the event that our hearts are in any way burdened in this most sacred of seasons, may we gain strength and comfort from the facts of the Christ Child’s sacred, but lonely, birth:  a loneliness which, though real, was also fleeting; and a loneliness which, in time, was transformed by the message of peace, hope, and love,” said Prime Minister Douglas.

He concluded his 19th Christmas message as Prime Minister with the prayer “that our hearts will be filled with the blessedness of peace, the elixir of hope and the transformative gift of love.”

“And in the days following Christmas, a time often devoted to celebration, may each of us remember our special responsibilities to ourselves and to others,” the Prime Minister said.