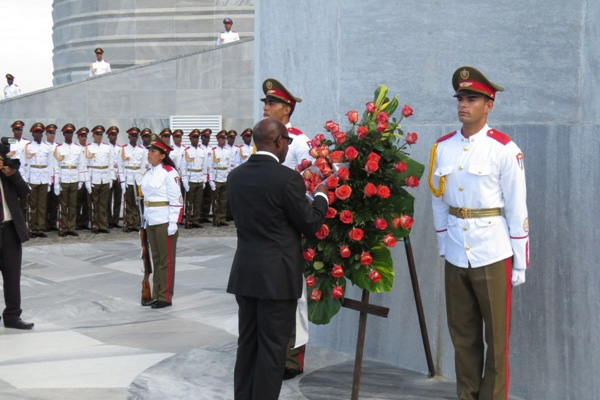 Basseterre, St. Kitts (CUOPM) – The Prime Minister the Right Hon. Dr. Denzil L. Douglas returned to the twin-island Federation Thursday afternoon at the end of a four-day Official Visit to the Republic of Cuba.

Prime Minister Douglas, who was accompanied by the Hon. Patrice Nisbett, Minister of Foreign Affairs, Homeland Security, Immigration and Labour; Mr. Kenneth Douglas, Ambassador –designate of St. Kitts and Nevis to the Republic of Cuba, Mr. Jose Rosa, Vice President of the Manufacturing Division of the St. Kitts and Nevis Chamber of Industry and Commerce and Mr. Erasmus Williams, Press Secretary to the Prime Minister.

Highlights of the visit included the opening of the St. Kitts and Nevis Embassy in Havana, Cuba; the Official Welcome Ceremony at the Palace of the Revolution by the President of the Republic of Cuba, His Excellency, Mr. Raoul Castro and inspection of a Guard of Honour; a State Dinner hosted by President Castro in honour of Prime Minister Douglas, the Wreath-Laying Ceremony at the Monument of Jose Marti and a visit to the Jose Marti Memorial.

The St. Kitts and Nevis Leader and his delegation also visited Labiofam – a research center and Heber Biotec, makers of a product capable of stimulating the healing of diabetic foot ulcers, with the aim of significantly reducing the number of amputations in St. Kitts and Nevis.

Full reports will be given over the next few days.