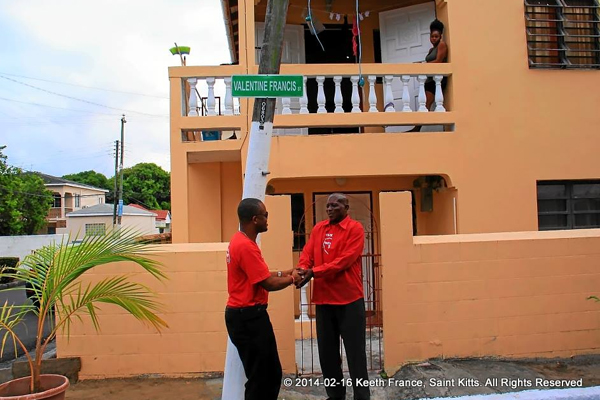 Responding to a caller on his weekly radio programme “Ask the Prime Minister,” on Tuesday, Dr. Douglas expressed support for Sunday’s naming of a street after Valentine Francis, also known as Valentine Clarke, for his contribution to the cultural art form.

“Everybody knows that Valentine Francis has been the icon of our folklore here in St. Kitts and Nevis. The masquerade part of our colourful history, culture and traditions taken out of our mother Africa – Western Africa transplanted by the enslaved Africans – who came here and has continued through the years and to a large extent perpetuated by Valentine Francis of The Village,” said Dr. Douglas, who lauded Mr. Maynard.

“I want to tip my hat off to Konris Maynard for what he did on Sunday. I apologized for not being able to attend that function myself, I was in another meeting that went on very late, but I want to congratulate Val for this achievement and to commend Konris and his Labour Team because it is not Konris alone. Konris is only providing leadership, but it is the Labour team in the Village that came out and encouraged the young man Konris Maynard to lead in the way that he is leading to honour those who have built the community life and led on National Cultural Heritage preservation in St. Kitts and Nevis,” Prime Minister Douglas said.