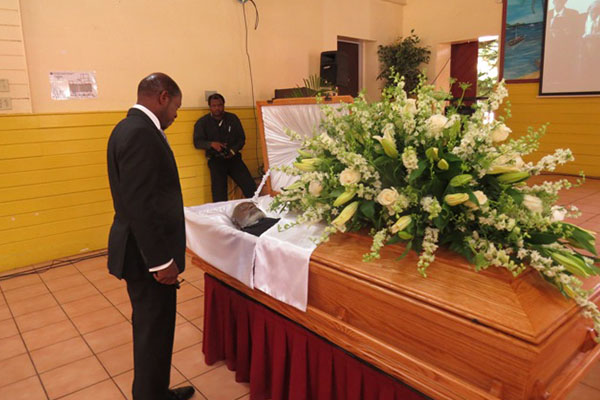 PM Douglas: “Joseph S. Archibald – an extraordinary human being revered for his mastery of his craft”

Road Town, Tortola, BVI (CUOPM) — The late St. Kitts and Nevis-born legal luminary, Dr. Joseph Samuel Archibald, Q.C. was not only an extraordinary human being, but one revered for his mastery of his craft.

“Joseph Samuel Archibald was an extraordinary human-being. One did not have to read his resume to know that. One did not even have to know his name. His very bearing spoke of a dignity, a self-mastery, and sense of self that cannot be taught and comes, instead, as a gift from God. He was one of those special human-beings who, from a very early age, filled those who encountered him with a sense which, though hard to define, was nonetheless real – an expectationthings, at the time, undefined…..un-seen and un-seeable…..but which nonetheless caused a stirring of the heart and a quickening of the mind,” he told a large congregation which included Governor Boyd McCleary, Acting Premier, Dr. the Hon. Kedrick Pickering; Anguilla’s Chief Minister, the Hon. Hubert Hughes; President of the Caribbean Court of Justice, the Right Hon. Sir Dennis Byron; Chief Justice of the Eastern Caribbean Supreme Court, Dame Janice Pereira; Appeal Court and High Court judges, lawyers from across the Caribbean including St. Kitts and Nevis, family members, the Clergy and hundreds of people from all walks of life.

Prime Minister Douglas said: “There was that palpable sense of promise in Joseph, the boy, in Joseph the youth”

He added: “And at neither the early, mid, nor senior stages of his extraordinary life did he disappoint. By dint of the dedication and discipline that were part of his basic character, and fueled by power of his extraordinary mind, Joseph Samuel Archibald moved steadily and deservedly to the very pinnacle of his chosen career. He was revered for his mastery of his craft, and well regarded for his qualities as a man.

Both a philosopher and a legal practitioner, Joseph Archibald was a profound thinker who never allowed himself to cheapenedby shallow, pedestrian notions of success, and instead thought deeply and well about what does, indeed, constitute a good and meaningful life. He was a man of extraordinary intellectual gift. Of clear and non-negotiable personal courage. And his very life bore witness to what it means to be a man .and to be fully human. He whom we honor today was a man of great personal integrity and compassion.”

Prime Minister Douglas reiterated that when all is said and done at the end of this sometimes grand, sometimes tumultuous, sometimes joyous and sometimes pained journey we call life, “it is compassion and integrity that, in the end, set the great souls apart.”

“Joseph Archibald was all these things – and more. Most of all, he was my friend. A source of faith and encouragement. And mirth, and laughter. A source of wisdom. And love. Yes, Joseph was my friend. I thank him.            I honour him,” concluded Prime Minister Douglas, who extended heartfelt sympathy on behalf of the Government and people of St. Kitts and Nevis, to his wife, Mrs. Inez Archibald, Deputy Governor of the Virgin Islands and other relatives.