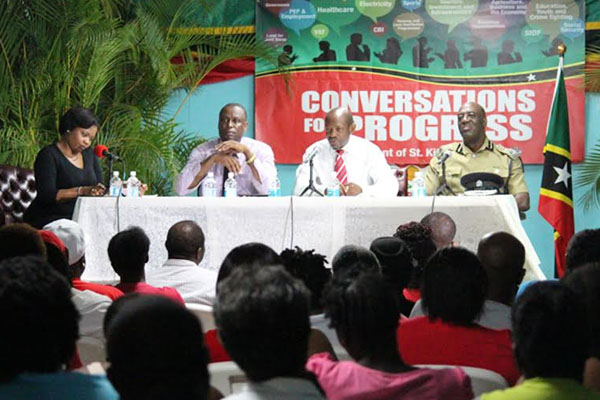 PM Douglas peps up PEP at Conversations for Progress forum

Basseterre, St. Kitts — As the Federation of St. Kitts and Nevis observed its 31st Independence Anniversary under the theme ‘A Nation on the Move, Celebrating our Progress’, a correspondent to one of the Conversations for Progress town hall meetings explained how the People Employment Programme (PEP) had pepped up his life.

Speaking in response to the correspondent at the Conversations for Progress forum held at Sandy Point on Wednesday September 17, Prime Minister the Rt Hon Dr Denzil Douglas castigated the people who had gone round saying that the People Employment Programme would only last for six months.

“We said that PEP was going to be the training ground for our people,” stated Prime Minister Douglas. “They said all kind of things, PEP is only there for six months. Thank God PEP is almost in there now for twenty months, nearly 24 months.”

The issue had been brought to the fore by the forum’s moderator, Ms Eboni Brandon, who said that she had received a WhatsApp message from a person who said that PEP was a blessing.

“I started working at a certain place on PEP and now I am getting triple what I used to get when I was on PEP now that I am full time,” read Ms Brandon from the WhatsApp message. “I have my reasons to thank the Prime Minister for the programme, I hope it lasts for ever, but in the event it doesn’t, I know it has been a blessing.”

The Prime Minister, who launched the People Employment Programme in December 2012 as a vehicle to train and find employment for young persons in St. Kitts and Nevis, responded that the programme is still running strong and expressed that it was realising its mandate as had been said by the correspondent, and affirmed that it will continue.

“December of 2012, you know how far we have been over in 2014?” posed Dr Douglas. “Nearly 24 months and PEP still going strong, and so this person is right. What we will do is use the PEP to train people. The skills are needed. We are short of skills.

“We do not want people to come all the way from outside and come take our jobs because our people are not skilled. I said the government has a vision. It said let us train our people now, so that they would be the first to get the skilled jobs here in St. Kitts and Nevis, and those jokers talking about only for six months.”

In agreement with the Prime Minister is PEP’s Project Manager Mr Geoffrey Hanley who is satisfied with the way the programme is progressing, in the nearly two years it has been serving the young, and the not so young, people in the Federation of St. Kitts and Nevis.

According to Mr Hanley, the People Employment Programme has provided a fertile ground for both job seekers and employers as training is open in all areas, and many are the employers who turn to PEP to look for persons who are skilled in the different vocations. He added that this will continue as the Prime Minister would have given an assurance in the past that the People Employment Programme is here to stay.

“We spent extensively on training in hospitality and we have quite a number of our persons who would have been trained in that field,” observed Mr Hanley. “They are in fact in permanent jobs leading in the kitchens at some of our hotels. So in fact you can see that the training has been effective.

“Moreover we have a set of our students who are at the hospitality training. We have now migrated them to the CFBC programme, where they are getting a more experienced training and exposure to what is to be expected in the larger hotels. For example we started our training in the community centres, took them to AVEC and now they are at the CFBC.”

The People Employment Programme is looking beyond training to ensure that there is sustainability and according to Mr Hanley, shortly the programme will establish a school of technology where persons who have gone through PEP and who wish to start their own businesses could get start-up knowledge.

“With these new initiatives you know most definitely that there is no way that the programme is in any way going to close,” reasoned the Project Manager. “We are going to be establishing a school of technology where those persons who are in their different training areas will now be exposed more direct into the technology.

“For example those persons who are in the Parks and Beaches, we are putting things together for them to be trained in entrepreneurial skills so that we can look into the possibility of setting them up in their small businesses as some of them would have been indicating that they just need a weed-eater or a lawnmower.”

Accordingly, PEP is taking it a step further by exposing the PEP participants to technology, where they will be put in the classroom for a while so they could be exposed to the computer as all of that will tie into their workings in terms of how they intend to market their businesses.

Mr Hanley reported that a number of persons who were attached to the various workplaces have been elevated to fulltime positions and he especially singled out the Royal St. Christopher and Nevis Police Force where a number of former PEP workers are full-fledged police officers.

He observed that there has been a significant, but positive, reduction of people on the PEP which suggests that they are taking up fulltime jobs, and he is hoping that the process of taking on the PEP workers for fulltime positions can be a little bit more rapid.

“There is still the challenge of some of the employers who have not yet grasped the opportunity of taking these PEP participants on to their payroll because I guess they would be saying they would keep it like that until government really makes a definite determination on whether or not they would have to,” explained Mr Hanley.

“But from the reports we have been getting, the workers in PEP have been making a difference in all the areas. The PEP is in fact a blessing. It is going smoothly and we look forward to many years of the legacy that this initiative would have caused. We have trained our young people and given them an opportunity to make something of themselves that would eventually cause our country to be a much better, safer and more developed country.”