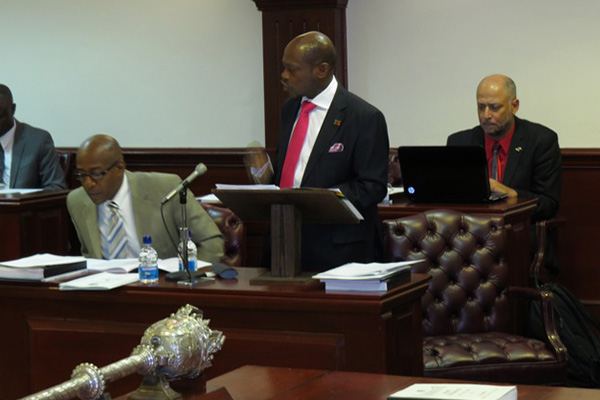 Basseterre (CUOPM) – St. Kitts and Nevis is reporting surpluses on the Recurrent and Primary Accounts as well as an Overall Surplus for fiscal 2012.

Prime Minister and Minister of Finance, the Right Hon. Dr. Denzil L. Douglas in reviewing the fiscal performance for 2012 confirmed that the Federation realised a Recurrent Account Surplus of $101.3 million, an Overall Surplus of $102.9 million and a Primary Surplus of $199.3 million.

“The Recurrent Account Surplus was $54.7 million above the outturn for 2011 and exceeded our 2012 estimate by $100.9 million.  The success of our Citizenship by Investment Programme continued to have a positive impact on Non-Tax Revenue which was the primary contributor to the strong fiscal performance for 2012.  Tax Revenue, on the other hand, amounted to $314.6 million.  This was $2.3 million (0.7%) below the 2011 level and $12.7 million (3.9%) less than the 2012 estimates. This underperformance of the tax revenue is in keeping with the economic conditions we experienced in 2012 as a result of the global recession.  However, we expect tax collections to increase substantially as the growth rate increases,” said Dr. Douglas.

He disclosed that taxes on Income continued its downward trend where collections for 2012 were $5.2 million (7.0%) less than the previous year but surpassed the budget by $2.2 million (3.3%).  The Housing and Social Development Levy, which was restructured in 2011, continued to perform beyond expectations exceeding the budget by 5.9%.  Revenue from Corporate Income Tax, however, was 1.5% below the estimate and 8.8% less than the amount collected in 2011.

Taxes on Domestic Goods and Consumption were also lower than both the previous year and the budget mainly on account of a reduction in revenue from the Value Added Tax.  Taxes on International Trade and Transactions, however, exceeded what was collected in 2011 as exemptions from the payment of Customs Service Charge were curtailed in an effort to improve Tax Revenue.  Nonetheless, this category of taxes fell below the budget as non-fuel imports for 2012 were less than expected.

With respect to Recurrent Expenditure, expenditure for 2012 surpassed the estimates by 7.3%, but was 11.1% less than the amount spent in 2011 mainly on account of the Electricity Department being corporatized.  As a result, the operations of that Department were no longer a cost to the Federal Government.   The corporatization of the Electricity Department, however, meant that the Government not only had to pay for electricity consumed by the various Ministries but also for street lighting.  Although provision was made in the 2012 estimates to pay for the consumption of electricity, the actual amount that was spent for the year exceeded the budget.

“I therefore urge Government Ministries and Departments to do their part in transforming our economy to a green economy.  We need to conserve energy; we need to use alternative energy; we need to go green.  Apart from the over expenditure on the consumption of electricity, the amount expended for consultancy fees in relation to the debt restructuring was higher than anticipated as the debt restructuring exercise took longer than originally envisioned.  Nonetheless, the restructuring of the debt was the primary reason for Interest Payments being 1.3% below the estimate and 4.6% below that spent in 2011,” said the Prime Minister and Minister of Finance.

Dr. Douglas noted the over expenditure on Goods and Services was moderated by savings that were realized in Personal Emoluments, Wages and Allowances as the wage and hiring freeze that was implemented in 2010 continued into 2012.  Consequently, this category of expenditure was 1.4% less than the budget and 0.3% less than the previous year.

The Overall fiscal outturn was aided by the receipt of grants, mostly from the European Union, which were used to finance both recurrent and capital expenditure.

“Mr. Speaker, for the 2012 fiscal year Capital Expenditure and Net Lending amounted to $55.5 million; 6.2% below what we anticipated we would spend but 22.4% above what was spent in 2011.  Of the projects that were undertaken during the year, 65.5% of them were financed from revenue while 21.1% were funded through loan disbursements and 13.4% from grant funds.  Included in the revenue-funded expenditure were the purchase of an office building at Golden Rock, a project to enhance the border secu

Revenue was also used to expand the water capacity on the island, relocate the Customer Service Division of the Water Department, install a new billing system for that Department and upgrade several of the sporting facilities around the island.

“As we made a concerted effort not to increase the debt burden, the use of loan financing for capital projects was kept at a minimum.  In fact, out of the myriad of projects that were undertaken in 2012, only three were financed by borrowing – the Hurricane Lenny Rehabilitation Project, the Child Development Project and a project to upgrade the equipment at the Public Works Department.  The E-Passport and the Border Management System Projects continued into 2012 and were facilitated through the acquisition of grant resources,” said Dr. Douglas.