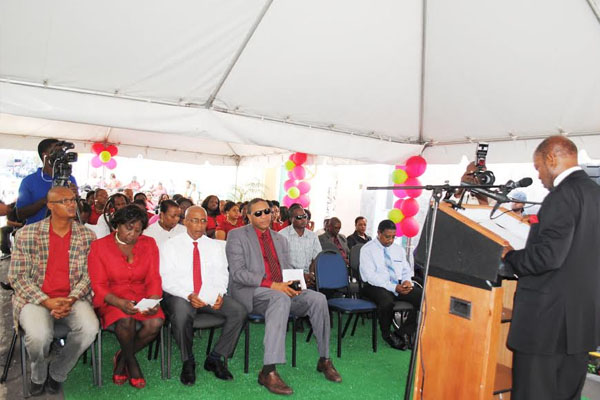 Basseterre, St. Kitts — The People Employment Programme (PEP) which was launched by the Federal Government of St. Kitts and Nevis in December 2012 is a non-negotiable component of any responsible government’s development strategy as it provides apprenticeship skills development and prepares the youth for the world of work.

Two years on and having successfully transformed the lives of over 3,000 persons in the various areas of vocation and training, Prime Minister the Rt Hon Dr Denzil Douglas who launched the programme, is assuring the nation that under his Labour government, the PEP initiative is here to stay.

“Today, two years after, we are still here,” said Prime Minister Douglas. “We are not only here as a government, but we are here to emphasise not only to those political critics who have been discarded, but we emphasise to the world that this PEP initiative is here to stay.”

The Prime Minister, who also has responsibility for Human Resources, made the remarks on Friday January 16 at a ceremony held on Princess Street in Basseterre to officially open the PEP’s new secretariat housed in the offices that were vacated by a section of the Ministry of Education, at the corner of Church Street and Princess Street.

The offices were vacated as they had been rendered uninhabitable due to an infestation of moulds, but were renovated and cleared of the offending moulds by members of the Women in Construction Trades (WICT) component of PEP, under the supervision of contractor and PEP facilitator, Mr Elbert Pemberton.

According to the Prime Minister, PEP has afforded quite valuable work experience to many persons who have been attached to work in communication companies, government offices, law offices, doctors’ offices, laboratories, retail outlets, wholesale outlets, landscaping and beautification projects, and in other areas they wished to gain work experience while being paid by PEP.

“And also it brings us back to the fact that we can acquire these skills without having to pay any student fees or any tuition fees for that matter and to do so while also at the same time receiving a weekly wage and a weekly income which happens to be the highest basic wage income for all of our public servants in this country, compared to other countries in the Caribbean region,” explained Dr Douglas.

Emphasising that the PEP initiative was the right thing to have been introduced in St. Kitts and Nevis, Prime Douglas observed that Germany which has the strongest economy in Europe has all along stressed the importance of apprenticeship for its country’s youth.

“It was just about two years ago after your government had already established the People Employment Programme that I happened to be reading the Miami Herald when I came across an article in which the German government was almost berating the other countries of Europe for not having put in place apprenticeship programmes for their youth,” pointed out the Prime Minister.

“I was very happy to come across that article because it further affirmed the wisdom of the course on which your government had at that time so vividly set out. Just look at the ways in which the People Employment Programme has helped our country.”

The Prime Minister commended the young people who stepped forward to acquire workplace and other skills, the companies that saw the wisdom of incorporating the young people into their operations and into their establishments, and also the Sugar Industry Diversification Foundation (SIDF) for providing the wages and salaries the workers have been earning.

“My government is honoured to have brought these vast and varying benefits to this our beautiful country, and we are strengthened and encouraged by the progress that your efforts have brought,” said Dr Douglas.

“It should be made absolutely clear that of you who have part of the PEP initiative today you have to make sure that you defend what is right and what is yours. Do not allow people to take bread out of your mouth. Do not allow people to fool you. I ask you to be wise, I ask you to remember that this has been your lifeblood for the last two years, and it will continue to be as long as the Labour Party is in government here in St. Kitts and Nevis.”

While opponents of the programme have been saying that the People Employment Programme is a waste of money, Prime Minister Douglas reaffirmed: “If I have to spend ten more millions dollars on you, I will spend it. You deserve it and so you have no fear. Labour is here on your behalf and will continue to be here on your behalf.”

He finally thanked the staff of PEP under the leadership of Project Director Mr Geoffrey Hanley for having successfully executed the programme, with the guidance and direction of the PEP Steering Committee chaired by Mr Elvis Newton.

The function was also attended by the Deputy Prime Minister the Hon Dr Earl Asim Martin; Minister of Youth Empowerment and with responsibility for PEP the Hon Glenn Phillip; and Head of the Public Service and PS in the Ministry of Foreign Affairs and Homeland Security, and Chairman of the PEP Steering Committee, Mr Elvis Newton.