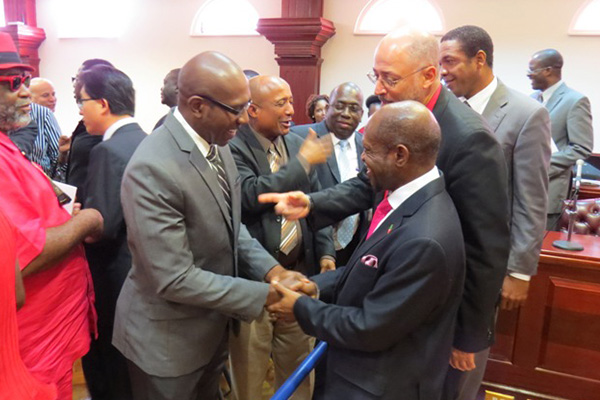 PM Douglas’ “Spring Time” 2014 Budget will “Win Big” for the people of St. Kitts and Nevis

Basseterre, St. Kitts (CUOPM) – Uttering clichés from two of his St. Kitts-Nevis Labour Party’s new candidates on the campaign trail, St. Kitts and Nevis’ Prime Minister the Right Hon. Dr. Denzil L. Douglas reaffirmed an overarching objective of his Government to continue  to improve the quality of life of the people.

“The main vehicle to achieving this goal is sustained growth and development.  In this Budget we have therefore been careful to commit resources to key areas that would drive growth including Tourism, Agriculture, small and medium enterprise development and Infrastructural Development. Despite the fiscal challenges that we face, we have ensured that the programmes and initiatives critical to improving the quality of life of our people have been adequately resourced,” said Prime Minister Douglas.

Concluding the 2014 Budget presentation in the St. Kitts and Nevis National Assembly, Prime Minister Douglas in his capacity as Minister of Finance, stated that judging from the record of the sterling successes and progress, the practical yet impressive plans put forward for 2014 and the passion and energy being applied to the implementation of real solutions to the challenges of the country, “you must agree that it is ‘SPRING TIME’ here in St. Kitts and Nevis. Yes, we are ushering in a new season of rejuvenation and visioning for our future prosperity! My Government and the country as a whole have definitely made some important strides over the last year.”

“Mr. Speaker, in considering the current fiscal position of the Government and the forecast for 2014, we have determined that there will be no major changes in the tax regime.  I want to make it clear to this Honourable House and the Nation that this is a tax free Budget.  The broad macro-economic policies that my Government adopted in 2013 are working and therefore will for the most part remain unchanged during fiscal year 2014.  It is anticipated that corporate income tax will recover and grow in line with GDP, international trade taxes will grow as imports increase and Citizenship by Investment programme will continue to grow from strength to strength,” he said.

Dr. Douglas pointed out that the Federation’s ‘home grown’ approach to dealing with the national debt situation has received international recognition.

“We have received much commendation on the creative approaches we have designed and the policies we have implemented toward addressing our debt service obligations. In fact, as you are aware, as Prime Minister and Minister of Finance of this Federation, I recently led a Commonwealth delegation of Small Island States to meet with the International Financial Institutions (IFIs) including the IMF, World Bank and Inter-American Development Bank. The purpose of those discussions was to examine how the debt situation of the Commonwealth SIDS can be managed in a way that would bring immediate relief and over the long term lead to debt stabilisation in these small vulnerable states. Overall, I am pleased that St. Kitts and Nevis was able to share its experiences with the rest of the world and the fact that this initiative holds great promise to yield tangible outcomes for all Commonwealth SIDS including our Federation,” he said to a packed gallery which included diplomats, representatives of the St. Kitts and Nevis Chamber of Industry and Commerce, the Manufacturing Division, non-governmental organisations, students of the Clarence Fitzroy Bryant College (CFBC), senior government officials and nationals.

Quoting  Theodore Roosevelt who said, ‘It is not what we have that will make us a great Nation; it is the way in which we use it,’, Prime Minister Douglas stated that his Government is charting a course that will facilitate the achievement of greatness for St. Kitts and Nevis ensuring sustained development and the reduction of poverty through the strategic utilization of the natural assets to create a sustainable island-state.

“We have shown commitment in this regard through the development and approval of the National Energy Policy (2011), the installation of over 100 induction lights along the Kim Collins Highway and a portion of the Frigate Bay Road, the use of solar lighting on the main road from Sandy Point to St. Pauls and at the R. L. Bradshaw Memorial Park, and the use of solar panels to generate a proportion of the power used by our very own Government Headquarters and, most recently the Robert L. Bradshaw International Airport with the assistance of the Government of China (Taiwan),” said Dr. Douglas.

Government he said is pleased that concession and duty free packages have provided the impetus for the integration of renewable and energy efficient technologies by the people in their homes and businesses.

“However, the greening of the economy includes more than ensuring energy efficiency. It also involves the fostering of eco-innovation across all sectors bringing business and innovation together to create sustainable solutions that make more efficient use of our precious resources.  Embracing the concept of a green economy can help to reduce the negative side-effects of our economy on the environment while creating economic benefits and competitive advantage. This will be the thrust of our development as we endeavour to remain one step ahead in an uncertain global economy which requires sustained collective action not only in St. Kitts and Nevis, but across the entire region. We are convinced that the transformation of St. Kitts and Nevis into a sustainable island-state would help to protect us from the massive fluctuations in the global economy by reducing our import bill and moving our economy towards greater efficiency in energy for electricity and food production,” said the Minister of Finance.

He spoke of continuing reform of the education system to make it more relevant to the needs of the young people and equip them with the skills and expertise that are in demand in the private sector. The objective is also to position them to be able to compete locally, regionally and internationally. The availability of scholarships to persons wishing to attend university has also increase.

“In this Budget our focus on poverty reduction and social protection will continue. A new National Social Protection Strategy will be implemented along with the introduction of the new Unemployment Benefit Scheme. Further, substantial resources have been provided to our Security Forces to continue their safety and security initiatives to further reduce crime, building on the success they have achieved so far in significantly reducing crime,” said Prime Minister Douglas, who also stated that Government will  continue upgrade of the health system to provide citizens with modern diagnostic equipment and tertiary level healthcare services such as haemodialysis.

“This Budget addresses the issue of the inability of many of our citizens to afford the cost of health care especially in the case of catastrophic illness. Therefore, provisions have been made in this budget to implement the first phase of a universal health care scheme. This phase will provide healthcare coverage for the uninsured beginning with the more vulnerable groups,” Prime Minister said.

He said that with the holding of the National Consultation on the Economy, his St. Kitts-Nevis Labour Government believes that it is important for all stakeholders, public, economic and social, to share in the process of consensus building on critical issues of development.

“We will create opportunities to continue the dialogue on the vision of a green economy and the transformation of St. Kitts and Nevis to a sustainable island-state throughout 2014. It is also worth repeating my belief that as with our debt management strategies, when it comes to the pursuit of a green economy, as a Nation we can push hard and arrive ahead of the pack. We are already on a good track and we should remain focus, focus on becoming the greenest and the most energy efficient economy in the region,” Dr. Douglas added.

He expressed confidence that the comprehensive programmes and initiatives outlined in this year’s Budget Estimates will help to build a platform for further growth and development of  St. Kitts and Nevis and a better quality of life for the people and more inclusive communities.

“This Budget is designed to win BIG for our people in 2014 and is testament to my Government’s unwavering commitment to continue to win BIG for every man, woman, and child who call this our beloved Federation home,” said Prime Minister Douglas.