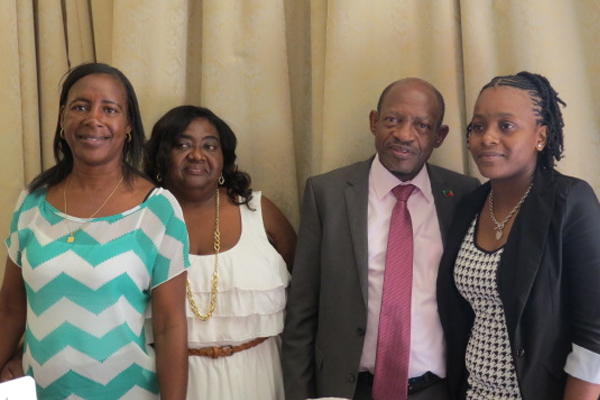 Dr. Douglas told some 650 persons at the Prime Minister’s New Year’s Appreciation Luncheon at the St. Kitts Marriott Resort and Royal Beach Casino that the St. Kitts and Nevis Labour Party is becoming mobilised in preparation for the next general elections.

“It was in December of 2012 that every political pundit had focused on St. Kitts and Nevis and there was the foregone conclusion (and) the thought that this life of this government was at an end, but I keep saying to people that Labour cannot die. Labour must be alive and we have to keep the fervour and the flame of Labour burning even when we are down because it is that which will eventually rise up again,” Dr. Douglas welcome the large gathering, among them several returning nationals home for the Christmas/Carnival Season.

“We welcome each and every one of you. We appreciate highly that you are here with us at this time. We do not take your support for granted and that is why to a large extent many of you, together with our own comrades are here for this appreciation lunch to show you how much we appreciate you,” said Dr. Douglas.

“We want to give God Almighty thanks and appreciation for His mercies. It has been a tremendously difficult year, in fact it has been two difficult years,” said Dr. Douglas.

“I want to thank each and every one of you for the full confidence that you had in your party, in your leadership and in you, yourselves and the other members of this great Party,” he said.

He pointed out that as a result work has continued to ensure that fifth consecutive term of the St. Kitts and Nevis Labour Party in government is concluded.

“Today we can boast of being #1 in so many different achievements both regionally and internationally. We have continued to demonstrate that with hard work and dedication and sacrifice, we will continue to achieve and that is what we will do from here onwards,” the Prime Minister said.

In thanking the Labour Party’s friends, brothers and sisters from Nevis, Prime Minister Douglas had a special message.

“I want for us to appreciate that we are one. We are one nation, one people, yet on two different islands, but borderless islands. We are one people and that is why a few weeks ago as we sat on Pinney’s Beach and demonstrated that oneness between us; with the two leaders, the St. Kitts and Nevis Labour Party and the Nevis Reformation Party, Parry and Douglas together on stage demonstrating to the people of Nevis and the people of St. Kitts that we are one and together we shall move as one to realize the aspirations and the goals of our people,” Dr. Douglas said.

“As I said to those young students in Nevis as they received their laptop computers a few weeks ago, whatever the students in St. Kitts are entitled to, you in Nevis as well, are entitled to it. Don’t let any politician deprive you of that right and so as we get into the New Year I say to you that there is tremendous work that lies ahead,” he added.

He disclosed that the St. Kitts and Nevis Labour Party is becoming mobilized in preparation for the next general elections.

“We are waiting for that date and that date is soon to be upon us. We want to ensure that those who thought that they can betray Labour, those who have been treacherous, we will show them that there is no reward for treachery, there is no reward for betrayal and we shall teach them a lesson that they have never seen before,” said Dr. Douglas to the thunderous applause of the gathering.

“And so colleagues and comrades, as we are about to take our meal, I want to toast to the New Year. I want to toast to continued success unto the St. Kitts and Nevis Labour Party. I want to toast to God’s continued blessings on this country. I toast that every single constituency no longer must we say All 8. It must be All 11. All 11 we must say, because all is for Labour and NRP,” said the Prime Minister as he led the “three cheers for this progressive nation, for the hard working Cabinet members, for the public service that has given us the support that we have needed and those who are the members of the parties that have come together to ensure that our government continues.”