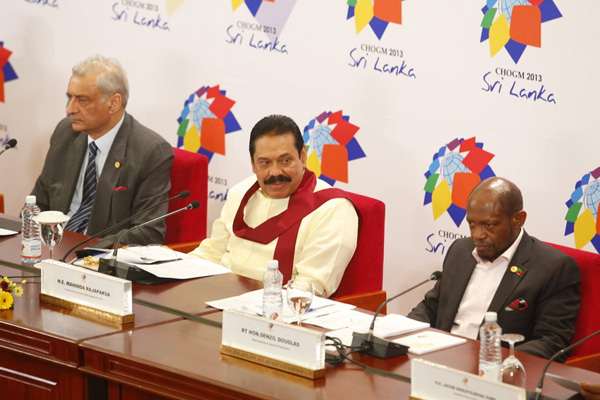 (CUOPM) St. Kitts and Nevis’ Prime Minister the Right Hon. Dr. Denzil L. Douglas has been providing information on the Mission he led to the meetings of the World Bank and IMF intended to deal with the issues of small states, small states debt; as well as the current CHOGM theme of “inclusive growth with equity and development.

Appearing at a Press Conference in Colombo, with Sri Lankan President, His Excellency Rajapaksha, the Prime Minister of Samoa and the Commonwealth Secretary General, His Excellency Kamalesh Sharma, the St. Kitts and Nevis leader addressed how to design policies and find the missing links to achieve inclusive growth.

Prime Minister Douglas said the time has come to use vulnerability as a criterion for accessing IFI resources (instead of GDP per capita).

At an all-day Retreat of Commonwealth Heads of Government held on Saturday during the Commonwealth Heads of Government Meeting, the St. Kitts and Nevis Prime Minister reiterated the recommendations of the Mission he led and called for the establishment of a Task Force to be established with the Commonwealth, IMF and World Bank to elaborate an appropriate framework and strategy for engagement with the G7 and G20 countries to address small states issues; and to endorse vulnerability as a factor in the reduction of high indebtedness of small states.

The proposals will tackle debt by swapping them for climate finances in ways that were not accessible before as well as allowing middle income countries to have access to concessionary loans.

“The time has come for vulnerability to be used as criteria to access concessional financial resources from international financial institutions,” said Dr. Douglas.

“We will be asking the Commonwealth to endorse recommendations regarding a framework to allow two things to take place. One, a task force to deal with international financial institutions and have an closer engagement with the G5 countries, especially since Australia is taking over G20 next year,” he added.

The second proposal is to allow small states to be able to contribute to the post-2015 development framework that is currently being discussed by the 53 members of the Commonwealth.

Some of the world’s smallest nations have asked Australia to put their needs on the G20 summit agenda.

Australia media reports that the Australian Prime Minister, the Right Hon. Tony Abbott will host and set the agenda of the global summit in Brisbane in 2014, formally taking over G20 chairmanship on December 1.

Speaking at the Commonwealth Heads of Government Meeting in the Sri Lankan capital, Colombo, St. Kitts and Nevis Prime Minister the Right Hon. Dr. Denzil L. Douglas said Australia was in an influential position being both chair of the G20 and a Commonwealth country.

As such, it should put on the table “specific measures to address growth and resilience-building,” Dr. Douglas said on behalf of the Commonwealth’s small states.

He said small states were locked out of financing from bodies such as the World Bank and International Monetary Fund, and needed to tackle issues of debt, development and “shocks to the economy” such as natural disasters.

The “vulnerability” of a nation should be a criterion for accessing funds, he said.

“All that is left is the political courage of the powerful nations to stop climate change.”

The Commonwealth defines small states as countries with a population of 1.5 million people or fewer.

Thirty-two of the world’s 44 small states are in the Commonwealth.